Cooking is a vast niche, and it has hundreds of cooking methods. People who are fond of French cuisine are a fan of sous vide. Sous vide uses heating devices, such as Searzall and torch. However, these devices can be used for other recipes. So, if you want to choose the right tool for adding finish and sear to your food, we are sharing everything you need to know!

Searzall is the perfect tool for everyone who wants perfectly brown and golden searing on the food. It is known to be a blowtorch accessory that can be used for searing however you want. It can sear food as much as you want by changing the temperature and heat levels. When used for searing, it might deliver the propane flavor, which can ruin the flavor of the recipe (guess you cannot use it for crème Brulee).

The Searzall is designed with two screens that tend to diffuse higher heat temperatures. This tool delivers consistent and shallow flame and makes a great option for searing salmon skin, steak, toast, and cheese. You might not believe it, but Searzall is perfect for reheating those leftover burgers and pizzas (you can use it for fresh burgers and pizzas as well, by the way).

It can be installed on the top of a blowtorch and will offer apt searing temperatures. We have already mentioned that it can lead to propane flavor, but the gas flavor won’t be there, so that’s a good thing. It has wire mesh made on the screens that deliver optimal temperature resistance. This screen material and design will ensure that the flame is consistent and even.

The best thing about the flame is that it makes the food look like restaurant food (the chef feels). We suggest using Searzall for meat to add the golden-brown layer. On the contrary, you might have to replace the mesh wire screens after some uses because they tend to wear down with time. In particular, the intense and high temperature damages the screen (or mesh, in particular).

Searzall has added the palladium coating on the screen’s back which promises better temperature projection and will be resistant to oxidation. When buying the replacement screens, choose the official Searzall store. However, the package comes with a sleeve adapter, attachment, and Allen key. Also, the spacing stick is there. Generally, assembling and using the Searzall is easy.

When you order Searzall, it is integrated with torch heads and a propane tank. Truth be told, it has high-end performance and adds a perfect browning to the food. The immersion circulator of this tool leads to a uniform outcome. In particular, in the case of sous vide cooking, Searzall helps add a crispy layer without long cooking hours.

If you want something powerful and intense temperature, the torch is the perfect option. Cooking torches are perfect for searing the steak because it needs a robust flame that only browns the surface and doesn’t impact the internal part of the food. Generally, these torches come with triggers that make them easy to use and work with.

When using it with meat, you have to keep it a bit away from the meat to ensure consistency and even searing (we suggest three inches to four inches). While using the torch, it is better to keep it moving because the intense temperature can even burn the food. In particular, the to and fro and swaying motion is suitable for optimal performance.

On the other hand, people don’t tune the torch right, which leads to an ineffective outcome. So, you must consult the manual and ensure proper tuning. The best thing about the torch is that it can be used to sear and grill the bread. For the most part, these torches come with refillable tanks, so you can fill in gas once the tank is empty. Even more, the torches are convenient to light up and use.

Torch is integrated with higher heat concentration; it ranges up to 2500-degrees Fahrenheit. The torches are designed with ergonomic handles, and the anti-flare necks deliver a flexible experience. It is better to opt for the gas flow adjustment lever as it will allow you to adjust the flame size as per your needs. The torch is suitable for caramelizing sugar, crisping the meat, and browning the meringues. Some people also use it for melting the cheese and skinning the tomato, and the results are amazing. 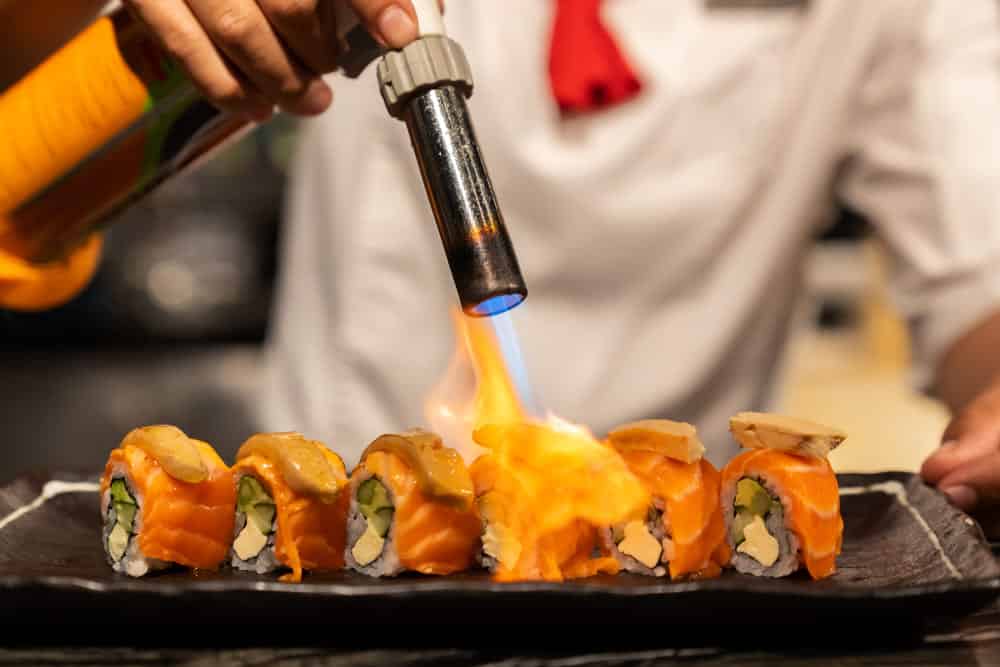