The single best way to enjoy healthier meals is to prepare them yourself. As such, any handy modern kitchen tool that can help you and save you time in the kitchen while also saving money is always a welcome addition to the modern kitchen. Most people know they can escape the hassle and bustle of home cooking by cooking with microwaves. However, another kitchen gadget that can lessen cooking time even further is the pressure cooker.

How does a pressure cooker work?

When you place water in a cooking pot, it is transformed into steam, which then raises the pressure within the cooking pot. As the pressure continues to build up within the pot, the boiling point of water is raised to as high as 250°F or 120°C. Typically, when other cooking methods are used, the boiling point can only get as high as 212°F or 100°C. Pressure cooking speeds up the cooking process as a result of the high heat inside the pot as well as the high pressure, which is responsible for forcing moisture in the food so that it can cook quickly.

How does a microwave work?

Microwaves, as the name suggests, utilize microwave technology to prepare food. Microwaves refer to electrical and magnetic energy waves that move together through space. When microwaves are produced in the cavity of the microwave oven, they bounce back and forth until they become absorbed into the food being prepared. As the food continues to absorb the energy from the waves, the energy is transformed into heat, which then allows food to cook through.

The differences between a pressure cooker and a microwave oven

A pressure cooker can prepare food faster than any other cooking method including boiling, baking or microwaving. For dishes that take an hour or more to fully cook such as brown rice, tough cuts of meat and dry beans, the pressure cooker can reduce the cooking time by as much as 70 percent. This means that when preparing speedy to cook foods such as rice, your meals can be ready in a mere matter of minutes.

When preparing food with a pressure cooker, you never have to worry that the food will cook through evenly, which is completely different when it comes to microwaves. This is because cold spots, or unevenly cooked areas, are usually the greatest safety concern when it comes to preparing food using a microwave. Different elements of microwaved foods generally absorb waves differently, which can leave certain areas undercooked.

If these areas contain bacteria in them, the warm, moist environment that is created by the waves creates the perfect environment for bacteria to multiply and thrive. If left uncooked, the bacteria can lead to gastrointestinal problems that can range from stomach discomforts to diarrhea and more.

The best candidates for microwave cooking are small veggies and easy to cook food such as rice. With a pressure cooker, you can prepare virtually all types of food, even make yogurt and make desserts, which is something worth considering when it comes to picking the most flexible cooking method. 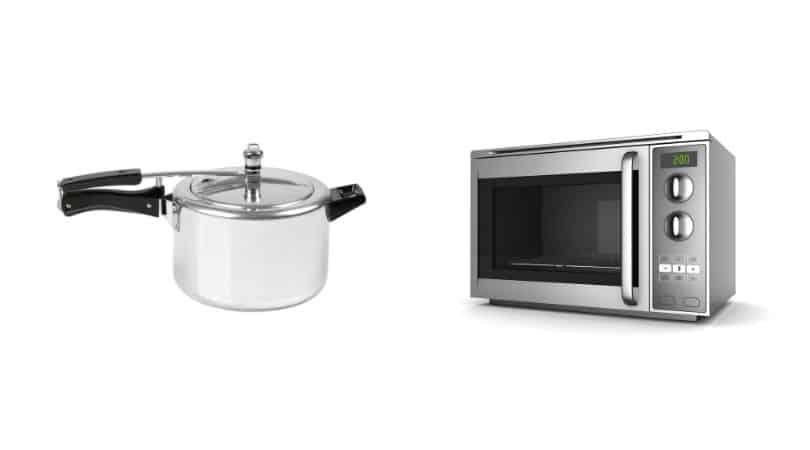