Expecting guests at your place around the evening? No Idea what to cook, potato pancake vs Hash browns? No problem, we got you. Here we will differentiate these two variants of potato-based on its look, texture, taste, recipe, sidelines, and favorites. By the end of the article, you know how and what to cook.

The Physical Appearance Of Potato Pancakes Vs Hash Browns

The hash browns are irregular in shape. They are just fried until they are brown, so they look more like an egg omelet. Whereas Potato pancakes are pressed and shaped by hand before tossing them into the pan for frying it, they look like regular pancakes.

The Texture Of Potato Pancakes Vs Hash Browns

Due to the difference in the recipe and the ingredients, the hash browns are thick, stuffed, and soft. But if we talk about potato pancakes, they are thin, crispy, and soft from the center. The crispiness of the potato pancakes gives it a lead over the hashbrowns, but to some people, hashbrowns’ softness makes it preferable.

Taste Of Potato Pancakes Vs Hashbrowns

The hashbrowns are shredded potatoes with a little seasoning over it of black pepper and salt. The pepper makes it spicy, and the salt adds its taste. The taste of hashbrowns is unquestionable. On the other hand, potato pancakes have some additional ingredients that make a real difference in the pancakes’ taste. Potato pancakes are made with egg and onion. Some people like to add lemon to it too, for a little sour touch and kill the egg smell. The egg makes it compact and gives it a sweet taste. The onion gives it the crispy essence and gives it an edge over the hashbrowns again.

Boil the potatoes in water, keep checking them with a knife or fork. If they are soft enough and the knife is comfortable going through the potatoes, take them off the stove flame and let them cool down. If you are in a hurry, wash them with cold water, they will cool faster this way. After this, peel off the potato skin and grind them in your grinder machine. Or you could mash the potatoes. After you have mashed them well, add an egg to it and mix it well with your hand.

Take one sweet onion, chop it, and add it to the mashed potatoes. Next, add one whole lemon’s juice and add salt to it. For further seasoning, add red pepper in a little amount. The hard part is done now. Light up the stove and place a frying pan on it, and pour some oil in it. When the oil is warm, take some of the previously prepared mash, give it shape with your hand and place it in the oil. Observe and take them out. Then the pancakes are golden brown.

Please take a few potatoes and take their skin off with the help of a knife. Take a shredder and shred the potatoes with it. Wash the sliced potatoes a few times with fresh water. Boil the shredded potatoes in salty water and boil them until the water turns cloudy. Take them off, get rid of the water, and rinse the boiled potatoes shreds with fresh water. Next, dry the shreds and add rice flour to it for its texture. Add salt according to your taste and add black pepper. Mix these ingredients well and then make hashbrowns with your hand. Let them freeze in the fridge for a while.

Meanwhile, fill a pan with oil and heat it. Take the frozen hashbrowns out and start deep-frying them in the oil. Fry until they are brown. And then take them out.

Sidelines That Can Be Served With Potato Pancake Vs Hashbrowns

The sidelines are mostly the same; they will do an excellent job with tea or a snack. But the hashbrowns are also eatable with rice. Many people prefer hashbrowns with rice or as a full meal. At the same time, potato pancakes are just a snack.

What Is Your Favorite?

If the guests are coming at an evening time for a cup of tea or snack, we would recommend you make potato pancakes and serve them with tea, biscuits, and ketchup. On the contrary, if the guest is expected for dinner, cook hashbrowns, serve them with rice as an appetizer, and bring in the main course a little after. 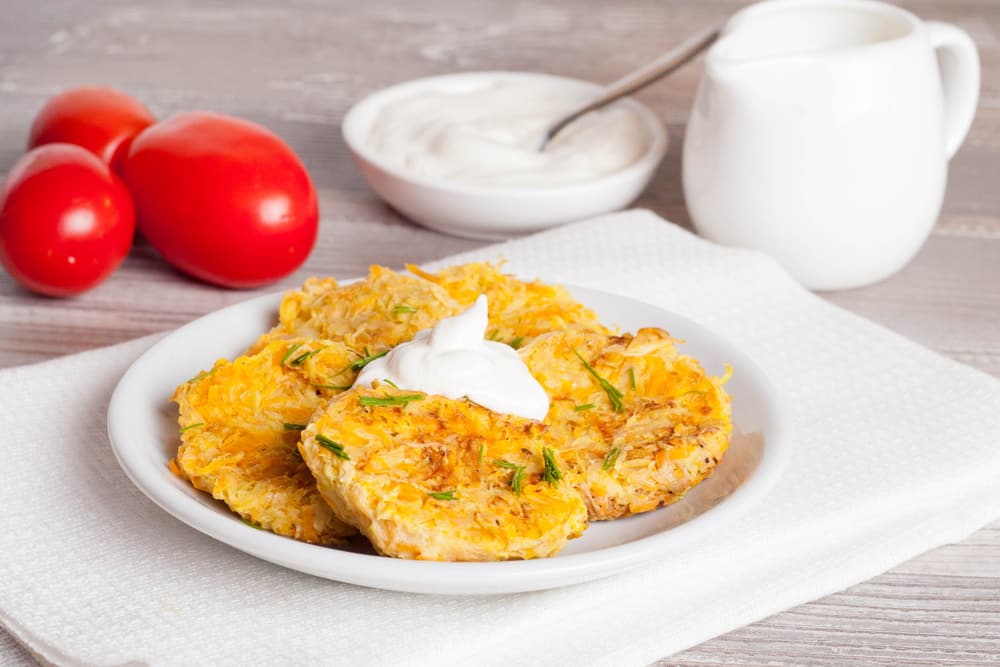