Phyllo (also known as Filo) dough is famous for making sweet and savory dishes. It is part of Middle Eastern recipes. It is a paper-thin pastry dough manufactured by rolling dough layers. The word phyllo originates from the Greek word for leaf, which means the thinness of a sheet.

Once baked, the sheets of phyllo dough become flaky and provide a crispy texture. Phyllo dough was traditionally prepared by hand with a rolling pin. However, manufacturers make it by using machines and sold in frozen form.

The sheets of phyllo dough are useful for all kinds of Middle Eastern and Mediterranean desserts and appetizers. Phyllo dough is healthier to use as it has no saturated or trans fats and also no cholesterol. It has just 160 calories per 5 sheets. Phyllo dough is an attractive option for desserts like baklava. You can use phyllo dough in various other recipes like appetizers and entrees e.g., salmon puffs.

What to use as a Phyllo dough substitute if you don’t have it in your kitchen. We are here to assist you in such a situation. If a recipe calls for phyllo dough and it’s not available on hand, then you can substitute it with the following alternative options.

It is a French dough having a rich flavor. Puff pastry and phyllo dough are pretty similar. Both doughs enhance the flavor and give a delightful flaky texture to baked goods, appetizers, and desserts. But the question that arises here is that can they be used interchangeably?

Phyllo is crumbly and light whereas puff pastry is denser. If we compare the manufacturing process, making puff pastry is much easier than phyllo dough. Puff pastry is somewhat like laminated dough and its airy puff relates to layers of butter. In comparison to puff pastry, phyllo is largely fat-free, therefore phyllo dough is healthier.

The Greek baklava recipes require phyllo dough. But in case of its absence, you can use Puff pastry as a Phyllo dough substitute. Use of Puff Pastry instead of phyllo will work in a pinch, but the dessert might have a little bit different flavor and texture.

Puff pastry is high in fats and calories in comparison to phyllo dough. So, if you are conscious about calorie intake, you should choose a healthier alternative for phyllo dough.

This dough is made from starch with only a few ingredients. Strudel dough is thinly wrapped around a heavy filling. In comparison to phyllo dough, strudel dough requires eggs and a lot of oil for its preparation. The presence of eggs and oil makes this dough more elastic that helps in rolling it out to a very thin layer. You should brush Phyllo dough with oil before baking it, while the oil is the essential ingredient in the strudel dough recipe. You can say that strudel nurtures with oil.

Phyllo and strudel dough can be used as an alternative for each other in emergency shortage situations.

You can make homemade phyllo dough for recipes like samosa or baklava. The ingredients you need for homemade phyllo are flour, water, lemon juice or vinegar, and salt. Place the flour in a bowl and make a well of flour in the center. Now add salt, lemon juice, olive oil, and water( at room temperature). Whisk the ingredients by using a fork. Knead the dough until it gets smooth. Transfer the dough to a large bowl and cover it with plastic wrap. For a good result, let it sit at room temperature for at least 1-2 hours.

Now divide the dough into pieces of equal sizes. Roll these pieces into paper-thin sheets of dough. After that stack phyllo dough sheets by layering parchment paper between them. Wrap them in plastic wrap and store them in the refrigerator for later use.

Phyllo dough is a Greek and Middle eastern crunchy thin dough required for the preparation of many dishes. Now you are familiar with three phyllo dough substitutes and their basic features. Try these alternative options while following any recipe that calls for phyllo dough. The choice of substitutes should be based on the number of calories and fats that you want from those recipes. 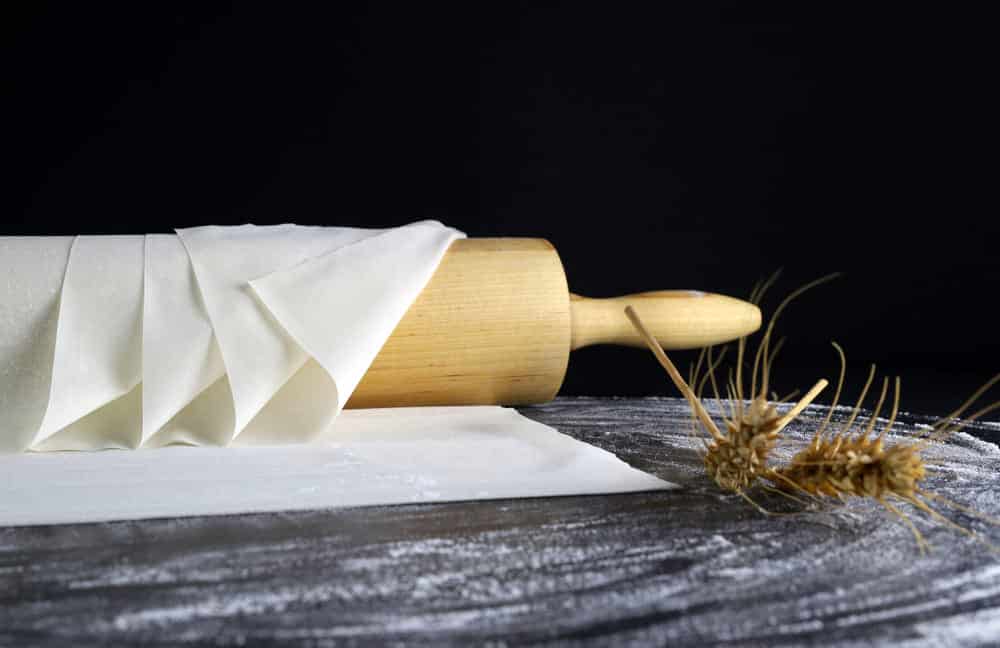