Soy sauce is a crucial component of every pantry. Truth be told, there’s nothing quite like this tasty brown sauce with its rich umami flavor profile. Despite all soy sauce having the same base flavor, different brands of soy sauce each offer a unique spin on the classic taste.

In this article, we’ll be taking you through a comparison of La Choy vs. Kikkoman so that you know all the main highlights of these two fine soy sauces.

Learn all the differences between La Choy and Kikkoman so that you always know which type of soy sauce suits your dish best.

Many around America, Japan, and various other regions of the world know Kikkoman to be the original soy sauce, but in actuality, it’s just a distinctly traditional Japanese variety with quality and flavor that far exceed most of the competition.

The Kikkoman Corporation has been manufacturing soy sauce since being founded in Japan on December 7th, 1917. Today, the company has offices and production units in Japan, Singapore, China, the Netherlands, Taiwan, Canada, and the US.

Kikkoman’s glass bottle is specifically designed to deliver a controlled flow of soy sauce. It is a highly effective design with two holes that lets you dispense exactly as much sauce as you need without the risk of messing. Simply block one hole intermittently to speed up or slow the flow. 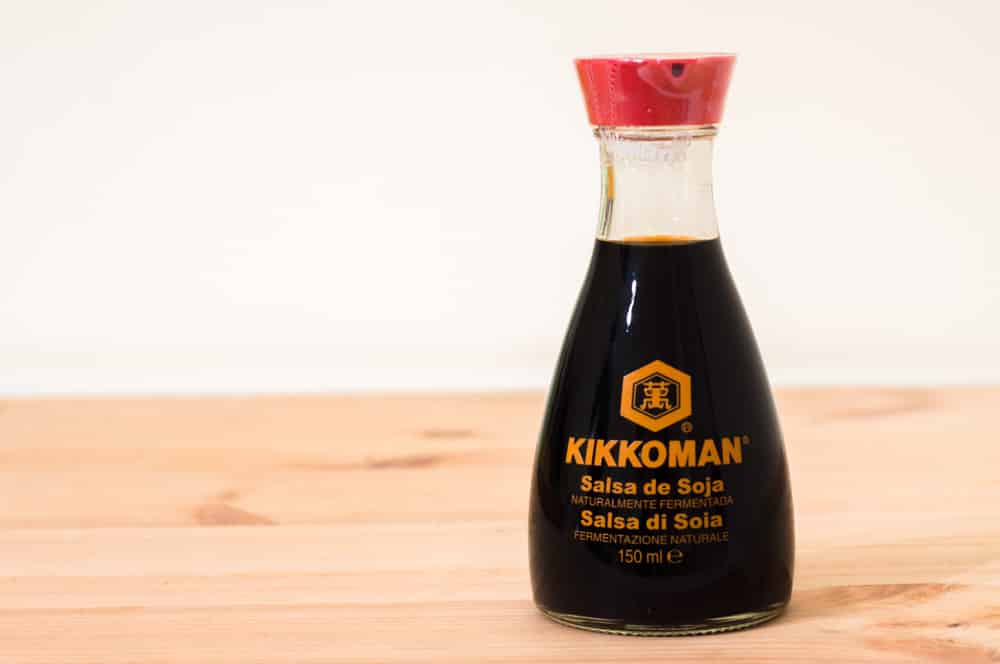 The company uses a sloped bottle design with a broad bottom tapering upward toward an enlarged spout.

It’s far more savory than La Choy’s sauce, and it has a richer texture with a greater depth of flavor and more complexity overall, thanks to the natural brewing process.

As an all-natural soy sauce, Kikkoman contains soybeans, wheat, salt, water, and alcohol that form naturally during the fermentation process. 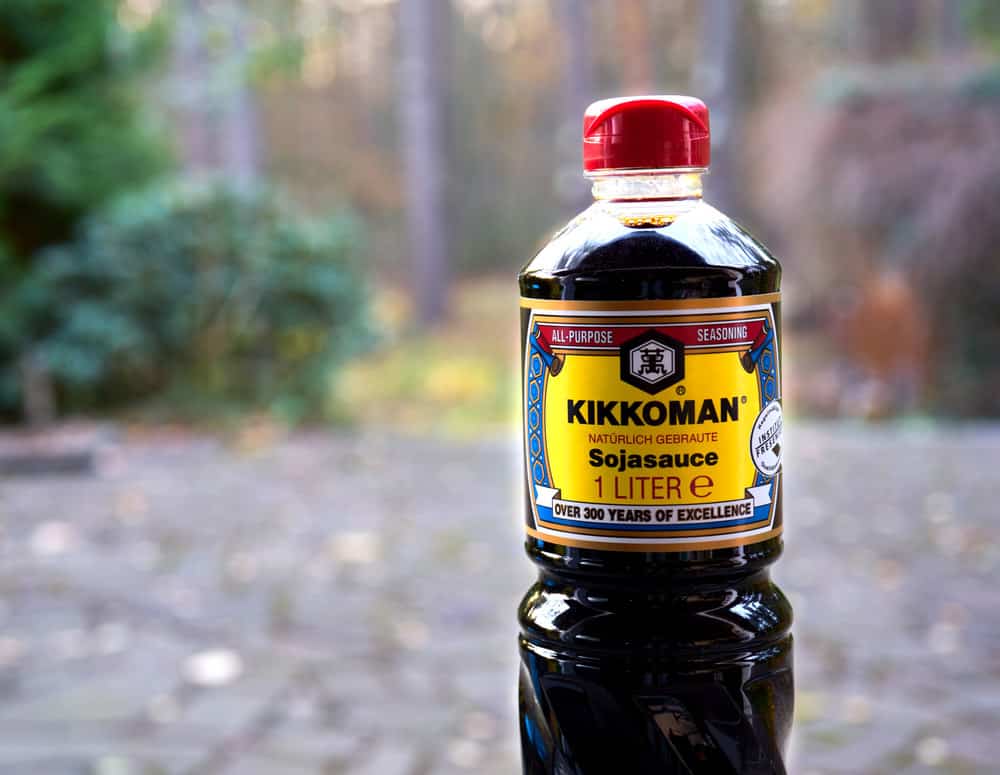 Kikkoman contains between 1.5 and 2% alcohol by volume. The variable alcohol content arises naturally as a consequence of the brewing process. Wheat starches break down into sugar and a small concentration of alcohol.

Just like the Mailliard effect brings out the roasted flavor of sugar fortifying the taste of the soy sauce, so does the alcohol enhance the flavor and aroma, which makes Kikkoman Soy Sauce so unique.

The fermented solution is transferred to brining tanks which process the raw sauce to a semi-done liquid termed ‘moromi.’ 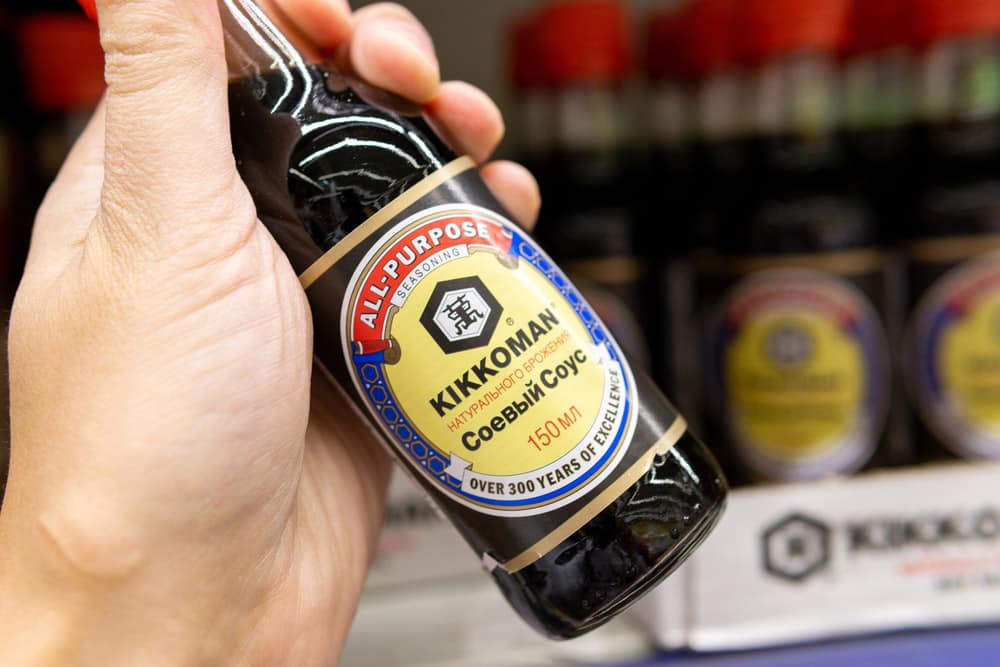 Finally, the moromi is left to ferment for roughly six to eight months, and then it is pressed in unpasteurized soy sauce. Kikkoman’s soy sauce is then pasteurized, filtered, and bottled.

There is no other brand of soy sauce that is as readily available as Kikkoman Traditionally Brewed Soy Sauce. It’s the most popular soy sauce in both Japan and the USA while serving as a leading choice in countless other countries as well.

With global reach and distribution to over 100 locations, few soy sauces can compare to Kikkoman’s availability.

The standard, smallest-sized bottle (5 fl. oz.) of Kikkoman Traditionally Brewed Soy Sauce retails for between $5 and $7 a bottle depending on where you’re shopping and how many are purchased at a time. 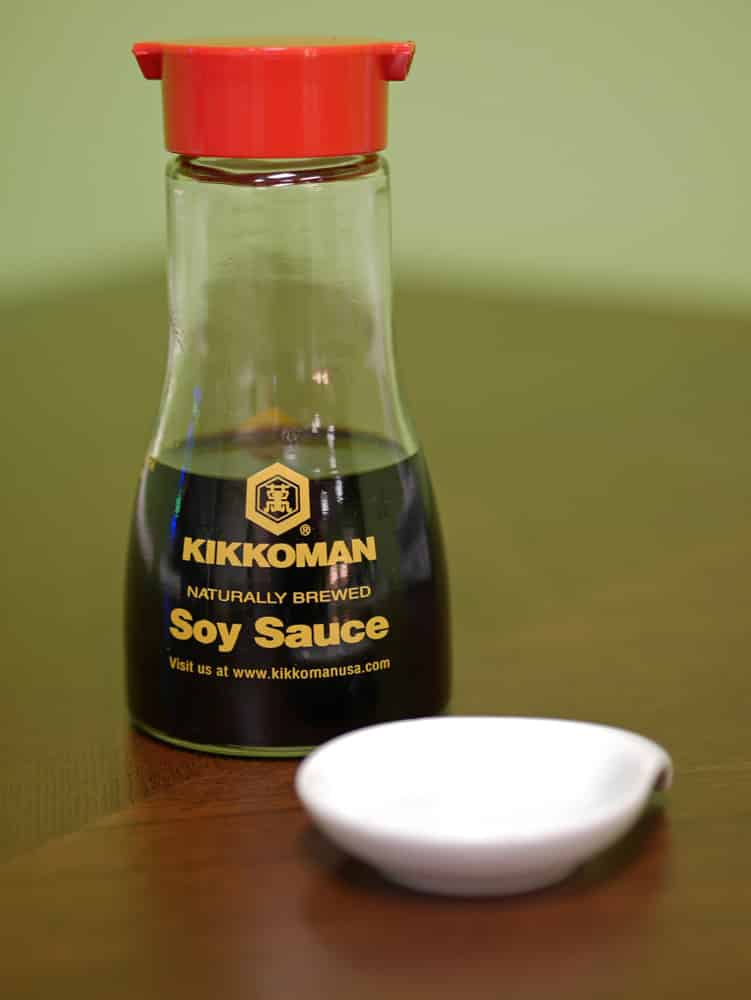 Soy sauce from the Kikkoman Corporation is ideal for marinating fish and meat. In addition, it can be used as a dip for sashimi and sushi, and it’s excellent to eat with eggs. Stir-fries come out sensational when using Kikkoman.

Let’s take a closer look at La Choy soy sauce and how exactly it differs from Kikkoman’s offering.

La Choy is a brand that was founded in 1922 by Dr. Ilhan New and Wally Smith. The Chinese-American company first started selling La Choy soy sauce and other products in a grocery store situated in Detroit that Smith owned.

By the end of the 1930s, La Choy had expanded its range to include a variety of food products not limited to soy sauce alone. Today, La Choy is owned by ConAgra Foods Inc. 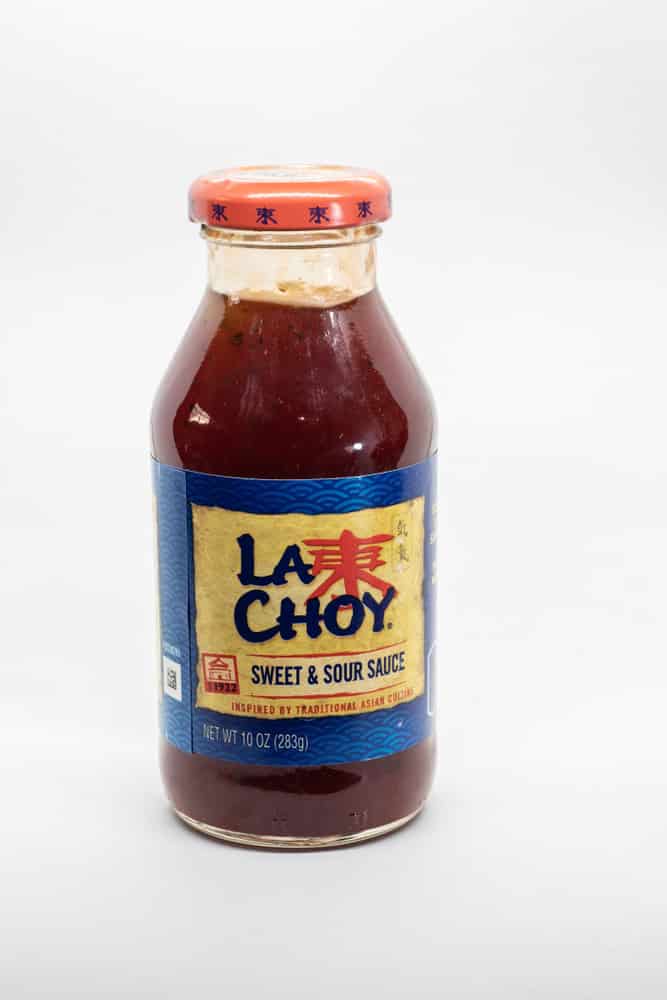 As a Chinese soy sauce, expect a rich, boldly sweet umami flavor that’s tangy and rich without being as intensely savory as the sauce from Kikkoman. 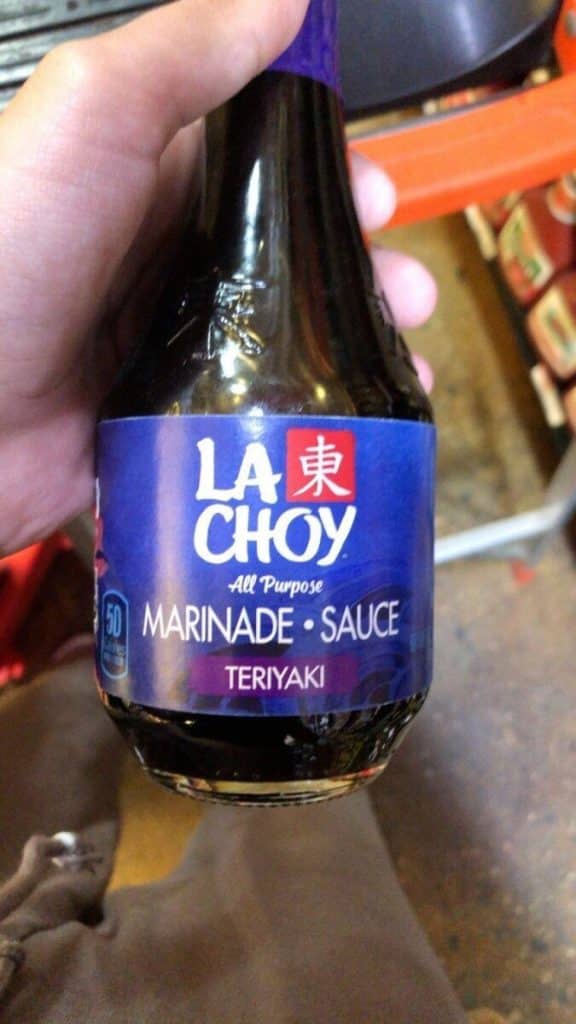 There is absolutely no alcohol present in La Choy’s soy sauce or other sauces. The lack of natural fermentation prevents any alcohol from forming.

La Choy offers their soy sauce in 10 and 15-ounce bottles.

While the exact manufacturing method is a trade secret known only to La Choy, the company hydrolyzes soy by putting it through a chemical process that breaks down the soy molecules into amino acids with the distinctive umami flavor that we know.

The soy solution is combined with water, corn syrup, preservatives, coloring, and a flavor enhancer to thicken it and grant a pourable consistency. 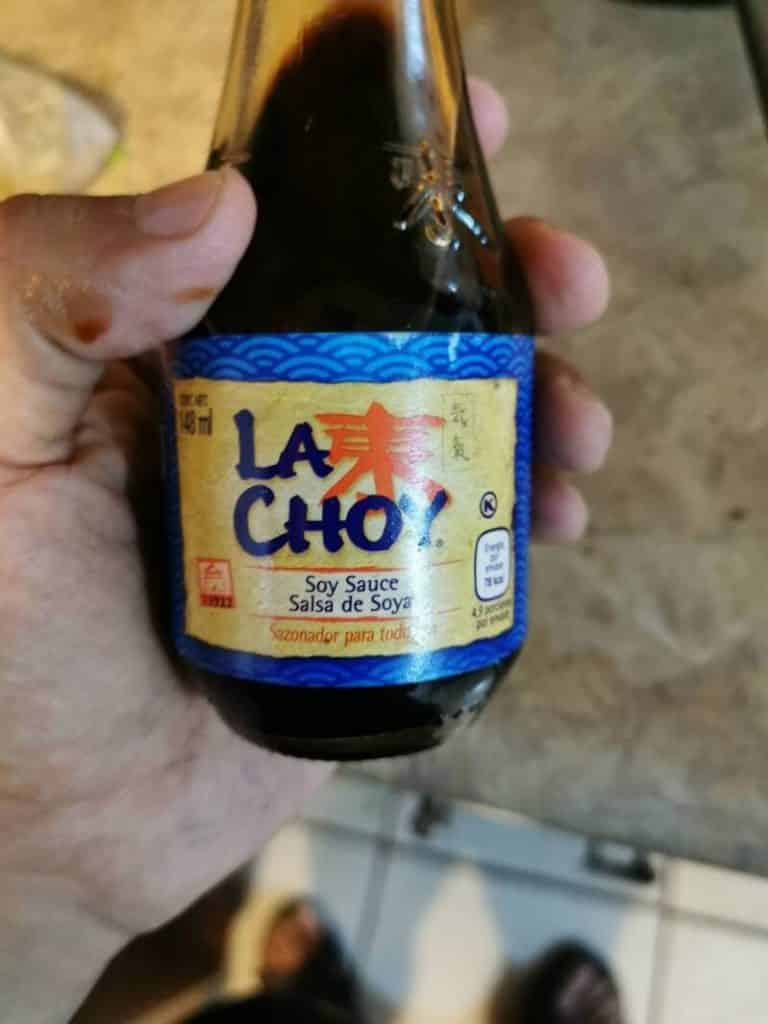 The 10-ounce bottle of La Choy Soy Sauce typically sells for anything between $6.30 and $8 a bottle, depending on where you’re shopping and how many bottles you buy at a time.

Some people add this soy sauce to vegetables, and it makes a perfect ingredient for Asian marinades. It’s perfect for Chinese food and any Asian dish that calls for a sweeter soy sauce.

From chow mein and chop suey to sweet and sour foods, La Choy Soy Sauce is great. Fans love it on everything from salads to noodles.

There will be a definite degree of sweetness added to anything that you use La Choy Soy Sauce in. Anyone familiar with Chinese food will know the sweet taste very well. Keep this in mind when trying to choose the best soy sauce for your dish.

What Is The Difference Between La Choy Vs. Kikkoman Soy Sauce? 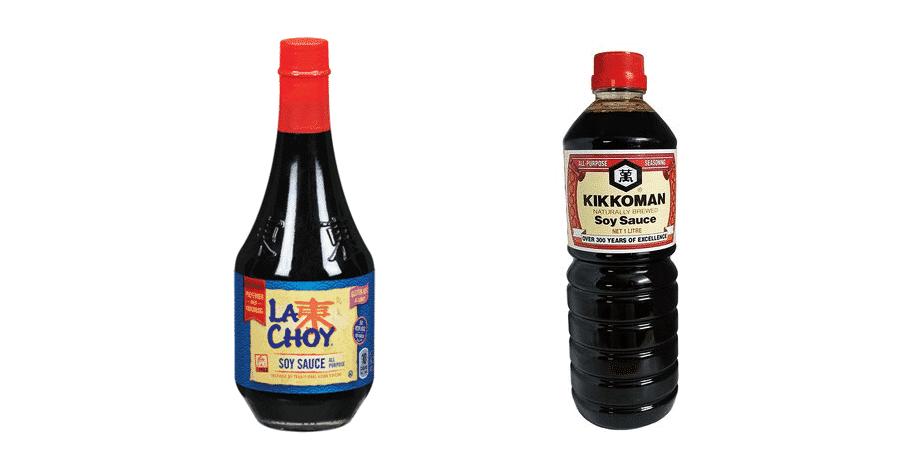 The main difference between La Choy and Kikkoman’s soy sauce is that La Choy’s sauce is a non-brewed Chinese-American soy sauce made from hydrolyzed soy, whereas Kikkoman Traditionally Brewed Soy Sauce is a Japanese soy sauce brewed using traditional methods from a combination of soy and wheat.

Which Is Best Between La Choy Vs. Kikkoman? 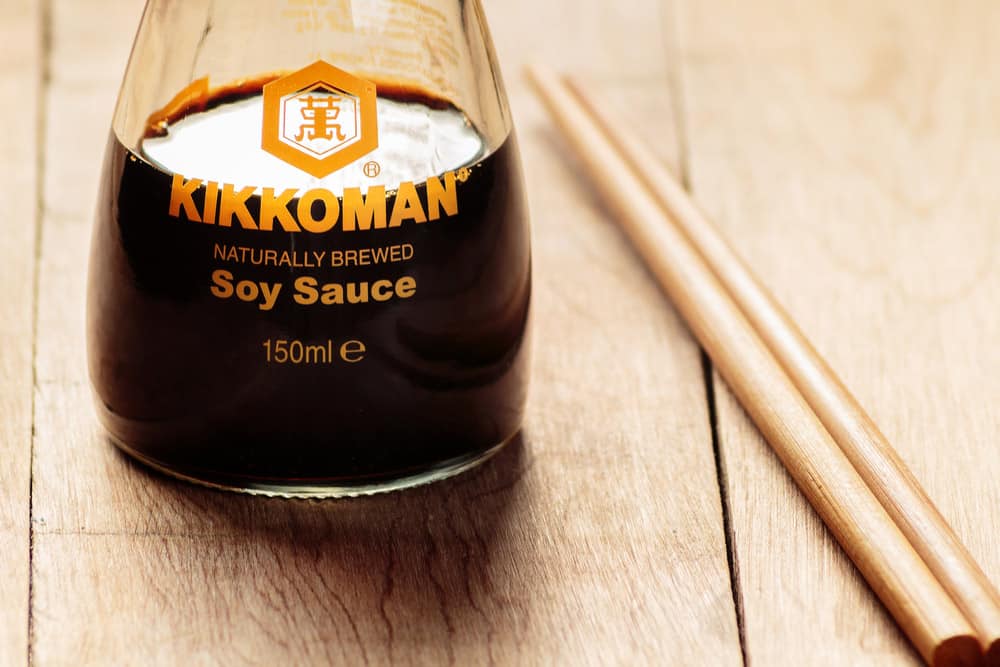 The best soy sauce between La Choy vs. Kikkoman depends on the flavor profile you’re looking for. Kikkoman offers a richer, more savory sauce with a subdued sweetness and slight acidity thanks to the alcohol present, whereas La Choy supplies sweet, salty flavor with low pungency.

La Choy is best for Chinese food. Kikkoman soy sauce is typically best for everything else. Many describe the taste of Kikkoman’s sauce to be more substantial and authentic than the hydrolyzed sauce from La Choy, but this is largely nothing more than a point of preference. 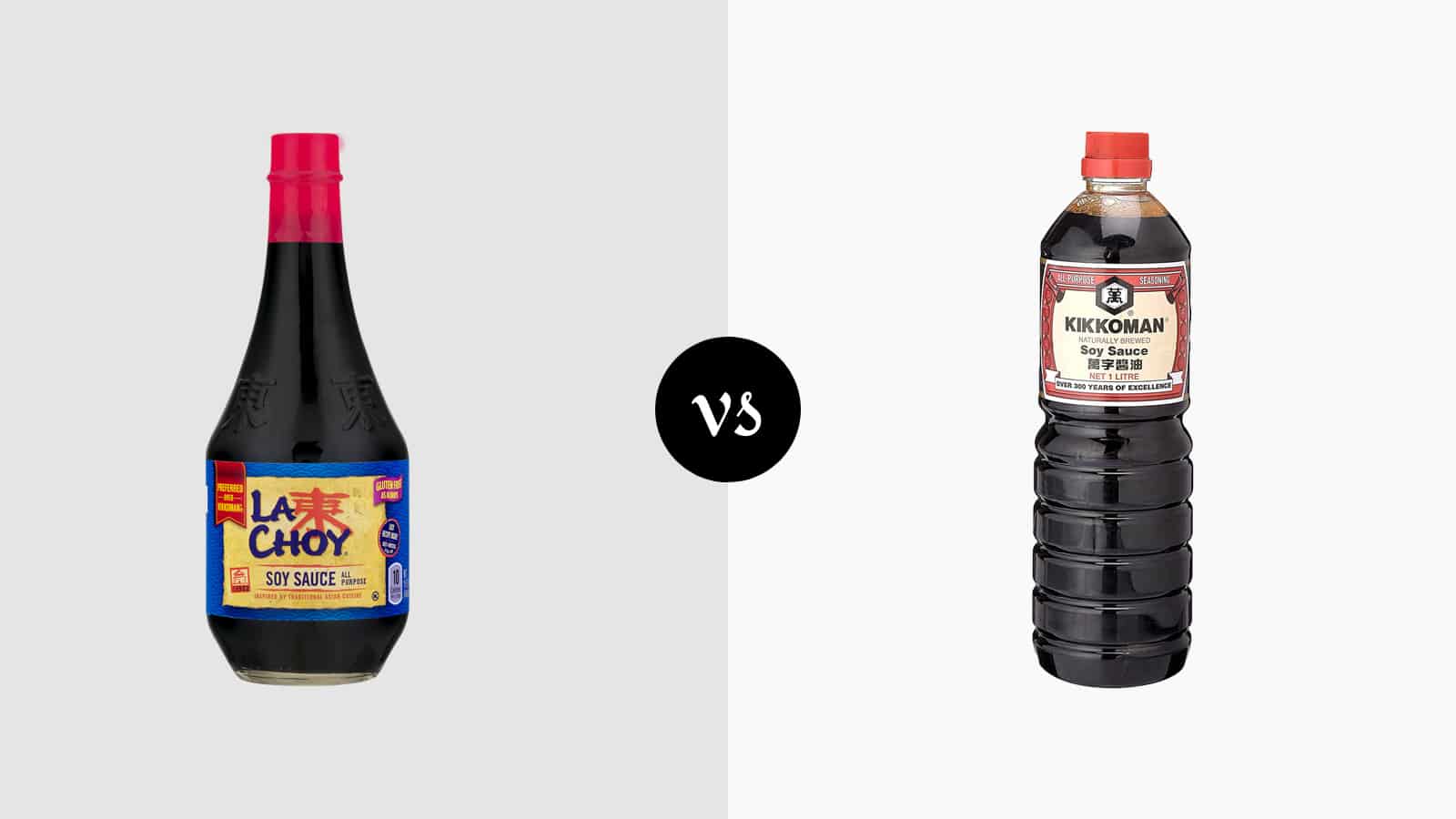