Kombu is a seaweed, traditionally consumed in Japan for hundreds of years. Along with Japanese cuisine, it is also famous in Chinese cuisines. Kombu can be consumed in two ways. Either by making a broth out of the seaweed or by boiling it and having it as a side or appetizer. More than usually, Kombu broth is widely sought to make dishes like the Boiled Tofu, Kombu Tsukudani, Udon noodles, and much more.

The seaweed itself is called Kombu while the broth made using the seaweed is called Dashi. Commonly, the dashi compromises an additional ingredient like mushrooms, fish, or chicken. It is flavorful and rich in Umami flavor. The umami taste is one of the five flavors, that is rich and has a delicious savory aroma. The meaty palate that Umami flavors have to offer is relished. The Umami flavor translates to “essence of deliciousness” in Japanese.

Kombu is sometimes hard to find. You’re probably reading this article because you can’t get your hands on some Kombu either. Worry not! We’ve got a list of substitutes for you.

Make sure you use dried Shittake Mushrooms for a rich flavor. Just boil the mushrooms in some water. For the flavor add a few basic herbs like basil, parsley, and oregano. Once the stock is ready you can grind the mushrooms and let them cook in the stock. This way your stock would be bursting with flavor and you won’t even feel like you used a substitute.

Don’t be confused if you’ve never heard the word Ajinmoto before. Ajinomoto itself is not an ingredient, rather it is just the brand name. So, what is Ajinomoto? It is just monosodium glutamate used as a salt. The Chinese have been using Ajinomoto salt as a flavor enhancer for many years. It provides the desired umami flavor and is easy to find in most leading superstores.

Getting your hands on fresh Kombu might be a little bit of a hassle. Dried Kombu is useable for as long as 5 years. However, alternatives like Kombu granules or cubes are easy to find. All you have to do is boil the granules in hot water. Once the granules dissolve, adjust the spices according to taste. Kombu Granules are ideal for getting the Dashi flavor.

Whitefish is the answer if it’s the most desired umami flavor that you’re after. Whitefish is easy to find. Just clean the fish out, and let it boil in some water. Add flavor according to your palate. Let the fish boil for an hour or two. Until you can feel the rich aroma filling up your apartment or even your neighbors. After all, this is fish we’re talking about.

Fresh Chicken stock is a great substitute option. To enhance the flavor, use a few mushrooms while making the stock. Grind a little boiled chicken and add it to the stock. This will give a fulfilling flavor. If you can’t get fresh chicken you can always use chicken cubes or ready-made stock. Go a little easy on the salt when cooking with ready-made products.

Unlike most chef’s what if you’re not looking for the meaty umami flavor? Or are you cooking a vegetarian dish for your vegan friends? Well, whatever the case may be, we’ve got the solution.

You can use other seaweeds like the hijiki or the wakame seaweed. Both of these are easy to find and even easier to cook. They’re commonly used for making vegan dishes, in soups and fresh salad.

Since Kombu is among one of the hard-to-find seaweeds. So, using a substitute doesn’t seem like a bad option. The alternatives are equally good and can get the job done. If you get your hands on fresh Kombu, make sure to store it. You can use dried kombu for as long as 5 years. After all, there’s nothing like fresh Kombu! 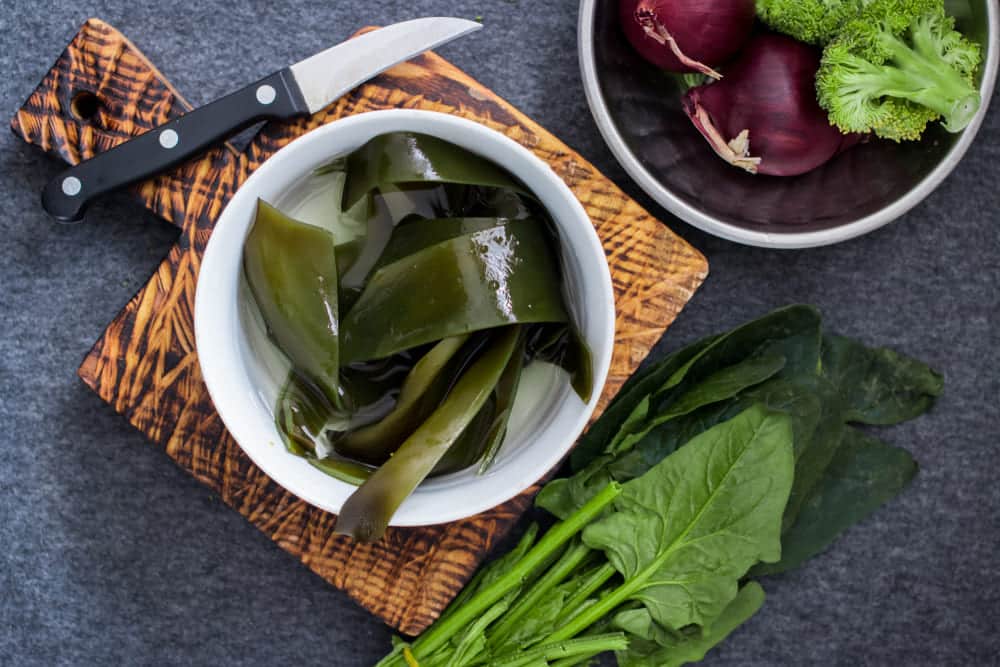