Be it eating salami in the delicious sandwich topped with mayo and mustard or snacking on salami, we are pretty sure that salami is your ultimate meat sausage. Salami is one of the widely-used cured sausages out there, but some people have a question, “is salami pork?” Well, it’s a no and yes. For this reason, we are here to share information about pork!

To begin with, salami is the cured sausage which typically made by air-drying and fermenting the pork meat. Earlier, salami was popular around Central Europe, Southern as well as Eastern Europe. It was basically a source of fresh meat for people since it could be stored for around forty days once cured. If we look at the typical usage, it is made from pork and beef, but some people use veal as well.

The straightforward is YES, salami is pork if we look at the traditional form. However, salami is also made with beef and veal. For some reasons, salami can be made from other meat forms and beef is usually used for the kosher salami. Beef salami is specially made for Muslims since there are religious limitations regarding the pork. The salami made from beef is known as kosher salami.

In addition to beef and pork, salami can be made from turkey and venison. If we look at the Northern Italy sides, goose salami is readily used. Also, some people have been making salami from horse meat. On the contrary, the donkey meat is used for making salami around Provence region in France. Usually, the ingredients like garlic, salt, white pepper, herbs, wine, and vinegar are used for salami.

With this being said, it’s a clear fact that salami is typically made from pork, but other meat types can be used to make salami as well. For this reason, salami can be made from venison, veal, beef, donkey meat, horse meat, goose meat, and turkey. Conversely, there are various salami can be made in various ways, in terms of herbs, spices, ground form, and meat. So, let’s look at various forms of salami, such as;

This is the hunter style of pork and is extensively used in Italy. As compared to conventional salamis, this is a smaller variant which makes a perfect snack. This is usually made from ground pork, and various spices and herbs are used for seasoning.

This salami is made from the neck and head parts of the pig and is either treated with spices or is smoked. Some people even use wine for seasoning. All in all, this salami makes a great option for sandwiches, given the tender and smooth texture.

This salami can be made from veal meat as well as pork. Genoa is made by garlic, red wine, and pepper seasoning.

This salami is cut out from the backfat park of the pig and is seasoned with rosemary for flavouring purposes.

Again, this salami is made from pork and is spiced with black pepper and red pepper. In addition, the pork meat is seasoned with white wine, garlic, and salt to make Napoletano.

This salami is cut out from the belly meat of the pig and is usually seasoned with spices and herbs. In addition, it is cured with salt.

This salami is made from tongue, belly, or stomach meat of the pig. It is seasoned with herbs and spices, but these seasonings will change from one region to another.

This salami is famous around eastern Europe and is either made from pork or the pork-beef blend. However, it is smoked after curing. As far as the flavour is concerned, it has a mild flavour, but the texture is often dry yet firm.

The bottom line is that salami is usually made from pork and is even minced with the pork fat (pig has extremely high-quality fats). However, there are various types of salami that are made from different meat forms, such as veal, beef, and more. In some cases, pork is blended with beef to make salami, commonly known as hard salami. 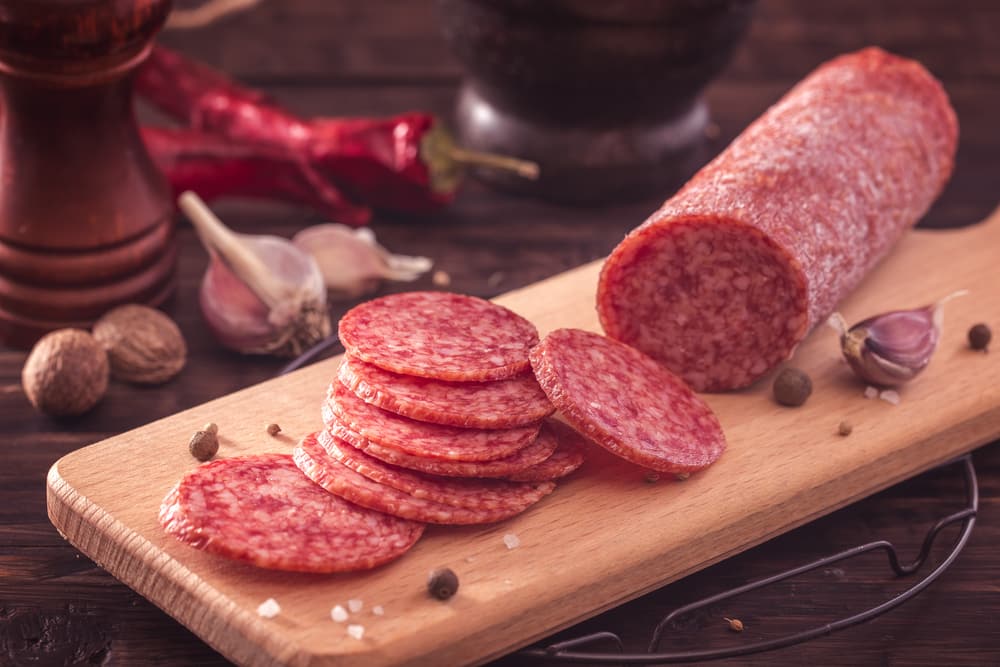