If you’re an outsider who doesn’t know about the ins and outs of cooking, the art of making delicious foods, upon a cursory glance, may seem like an easy task. But if you dig deep, just a little bit, you’ll notice that cooking is a very complex field. It’s a field that demands control, experience, and most importantly understanding. Because having an in-depth understanding of the various cooking ingredients, techniques, and environments are necessary to cook something palatable.

Covered Or Uncovered For Cooking?

Is it better to cook covered or uncovered?

Understanding when to cover and uncover, which one is better for a certain cooking scenario, and the duration of covering and uncovering is one of the basic pillars of cooking. To make this concept easily digestible we are going to explain it through multiple stove-top cooking techniques.

Cooking on a stovetop is done through pans, pots, and pressure cookers. All three devices come with a lid, and if you want to you can cook inside any one of them, covered or uncovered.

Covering a pot/pan results in two things, steam, and higher temperatures. As mentioned before, stove-top cooking is open-air cooking with a single-point, direct source of heat. Covering a pot keeps the steam and the built-up heat from escaping. As a result, you’re creating a cooking environment with higher steam content and heat intensity. Cooking food in such an environment requires you to take certain precautions because if your pot has less liquid content, cooking covered on high heat will most certainly burn your food.

Below we will explain two cooking techniques that require covering your pot/pan.

Simmering is a cooking technique where food is cooked below the boiling point. Most of the time, simmering is the final cooking step that’s used to intensify the flavors, to tenderize the meat, to thicken the soup/gravy, and to keep the food warm for a longer period.

Simmering is done on low heat, so avoid simmering if your pot has a lot of water.

Unlike simmering, steaming requires temperatures higher than 100 degrees Celsius. The basic principle is boiling your liquid (water) to create steam and using that steam to cook or speed up the cooking process. For example, steaming a batch of beef dumplings or pressure cooking a 6-hour stew in 30 minutes.

When you’re cooking food on high heat, you want to see and control everything that’s happening inside the pot. So whenever you’re cooking on high heat and your food is in direct contact with the heat source, you’ll want to keep the pot uncovered.

Vegetables are sautéed to give them a caramelized exterior. It’s a cooking technique that uses oil and high heat to kill foodborne bacteria in a short amount of time.

Oil and heat don’t mix well with moisture, which is why we sauté vegetables inside an uncovered pan/pot.

Stir-frying or frying are cooking techniques that use oil and high heat to cook various ingredients.

Stir-frying permits adding moisture, but at the same time, it requires you to caramelize your ingredients. Which is why stir-frying can only occur inside an uncovered pan/wok.

Frying is more extreme because you’re heating a pot of oil to temperatures above 100 degrees Celsius. Which is why we fry inside an uncovered pot/pan because you don’t want to add moisture into a pot of boiling oil. 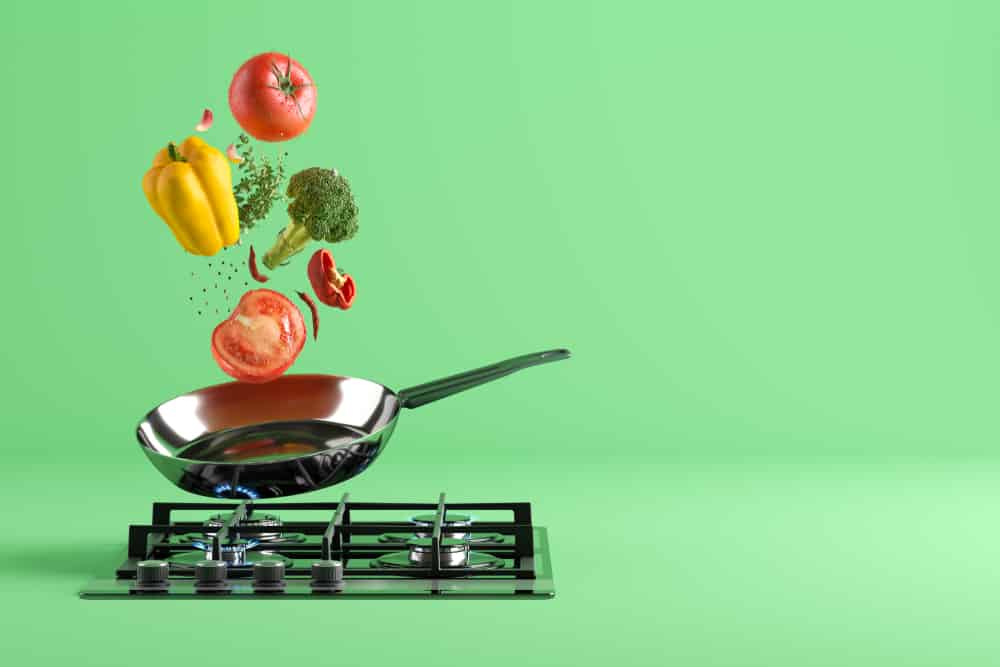