However, did you know that there are two further sub-categories found within convection ovens? Those differences will determine which is best suited for your kitchen and culinary habits.

More and more people are shifting to convection ovens, making it important to know your way around features and functionality.

So, what exactly is the difference between standard convection vs true convection in an oven?

What Is Convection Cooking?

A convection oven circulates air within the chamber evenly using a fan and exhaust system.

The better your convection oven, the fewer hot and cool spots, which means food that’s crisper, juicier, and better cooked.

With the help of convection cooking, food is cooked faster, more efficiently, and tastes better.

A balanced intensity of heat reaches the whole of the oven’s interior, which ensures that your meal is cooked to the same degree everywhere simultaneously.

Anywhere that there is space inside your oven is a place that you can fill and cook food to perfection.

As mentioned, there are two different types of convection ovens available:

Standard convection is very similar to a regular oven. A back-mounted fan circulates heat within the oven chamber, leading to a more even distribution than traditional cooking.

True convection ovens blow heated air towards the food in the center of your oven with the help of an element situated behind the fan. True convection is also known as European convection.

Standard convection ovens are only slightly more costly than their gas or electric non-convection counterparts, making them the better choice even when on a tight budget.

Standard convection radiates heat from either one or two stationary elements, circulated using a fan and exhaust system. The oven design is similar to a traditional oven, but the air circulation grants a better cooking experience.

The even heat distribution locks in flavor make meat cook and vegetables cook in their own natural tastes better.

Convection ovens cook food a quarter faster than regular ovens. This means that you need to reduce the cooking time by roughly 25% of what the recipe says if it’s written for normal cooking procedures.

While the wattage of standard convection ovens falls within the same range as most regular ovens, the vastly improved air circulation translates to improved efficiency.

Convection cooking comes with several notable benefits, but the biggest drawcard has to be just how well convection ovens roast.

Grilling, roasting, dehydrating, and baking fruit better results than a regular oven, with juices being locked in and outer layers turning crispy without dryness.

Expect to pay noticeably more for a standalone oven and hob, whereas countertop convection ovens and multi-cookers arrive at roughly the same price as an induction cooker. The value of money is outstanding.

It’s more efficient, grilling and roasting more evenly while vastly outperforming other ovens in tasks like baking and dehydrating.

Three elements are used to heat the chamber, each circulated using its own fan. Hot air moves faster while also being dispersed more evenly than a standard convection oven.

There’s no better way to make sure that there’s a constant temperature everywhere within the chamber than to use true convection cooking.

The fan and element are designed to complement each other, making the best use of the space and radiant heat.

True convection does everything standard convection does, but better. It’s far more effective at baking, browning, dehydrating food thanks to the even heat distribution and how heat constantly surrounds food.

Roasts roast more evenly, locking in flavor and crisping the out layer to perfection.

Three elements, rushing air and balanced heat distribution, give you better results than ever.

Baking is lifted to all-new levels, while roasting, grilling, reheating, and dehydrating is far more efficient and rewards with better results in every aspect.

From locked-in flavor to texture, everything’s better in a true convection oven.

They’re the number one option for commercial kitchens where fast cooking times are imperative.

One has to keep in mind the third element of a true convection oven. The wattage will be noticeably higher.

Just as is the case with a standard convection oven, true convection bakes, roasts, grills, and dehydrates far better than regular cooking.

It’s also a vast improvement over standard convection, but the biggest benefit has to be just how well true convection bakes.

Chemical reactions within the pastry occur quicker thanks to the fast-moving heat. This grants a better texture, flakier layers to pastry, and a larger yield from each batch prepared.

True convection ovens cost more than their counterparts and are more expensive to maintain. Most feature far more moving parts and are thus susceptible to incurring more widespread damage.

Fortunately, true convection is normally only featured by reputable manufacturers and high-end models. Should something fail, repairs are typically readily available at a nominal cost.

For consistency, you can rely on and cooking times that are a touch faster; true convection is the way to go.

Keep in mind that it’ll take a considerably bigger investment, but if you use your oven often, the value for money is outstanding.

Even if you only bake or roast occasionally but are a foodie at heart, true convection ovens reward with subtle but noticeable differences leading to tastier meals.

Ultimately, the final decision is yours to make. The results of standard convection compared to a traditional oven will sway you never to want to cook it any other way again.

It’s the most affordable option, but either way, you’re getting a piece of kitchen hardware that’ll become a trusted friend for a long to come. Happy cooking! 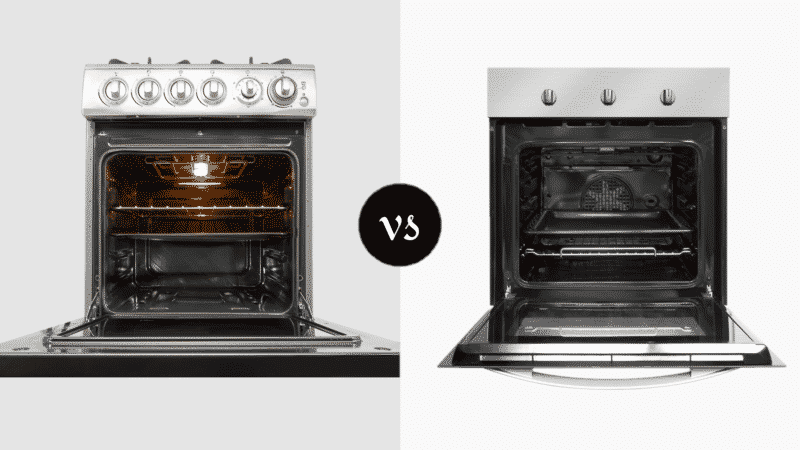