A Blackstone griddle has become the ultimate choice of people who like to make grilled food and love to host parties. This is because these are huge griddles and add an amazing flavor to the food, irrespective if you are cooking vegetables or meat. Having said that, many people tend to prepare the food on the griddle as well, which is why they ask if they can cut food on the Blackstone griddle. So, let’s see if it’s a possibility!

Can You Cut On A Blackstone Griddle?

The quick answer is yes; you can cut on the Blackstone griddle because it tends to have a tough and durable surface, which means it won’t get damaged. However, remember that it will dull the knife, and you might have to season the grill again because cutting can damage the seasoning layer. These griddles are made from high-end cold-rolled stainless steel, which makes them durable enough to handle a bit of cutting and chopping.

On the other hand, you need to be careful about the seasoning because the sharp edges of the knife will damage the seasoning layer and can scratch the cooktop surface. For this reason, even if it’s fine to cut on the griddle, it’s best to stick to the cutting board to ensure the knife’s blade doesn’t get dull and the seasoning layer is retained. As far as cutting is concerned, you can use the knife as well as a metal spatula’s edge because it is great at chopping food.

Keep in mind that the users are highly likely to scratch the Blackstone griddle when you haven’t maintained the seasoning layer properly – it happens when you aren’t careful about the oil consumption or when you become aggressive while chopping the food on the griddle; be it with a spatula or a knife. As a result, there might be some sticky spots on the griddle top, which you will need to clean (it means cleaning the seasoning and re-seasoning the griddle).

If you are concerned about what to cut on the griddle, you can cut the vegetables and meat. However, it’s best that you only cut the tender meat pieces on the griddle, particularly when it has a fully retained and developed seasoning layer (you can use the spatula’s edge). In addition, it is suggested to add hot oil to the griddle before you cut the meat to ensure it doesn’t stick and doesn’t scratch the primary griddle surface. On top of everything, if your Blackstone griddle has a nonstick Teflon layer, it is suggested that you only use silicon tools because the nonstick layer is extremely delicate.

The bottom line is that you can cut food on the Blackstone griddle, but it is not recommended if you cannot be extremely careful. On the other hand, the original Blackstone griddle comes with a wooden cutting board, so you can use it for cutting vegetables and fruits without worrying about damaging the surface of the griddle. So, are you clear on the matter? 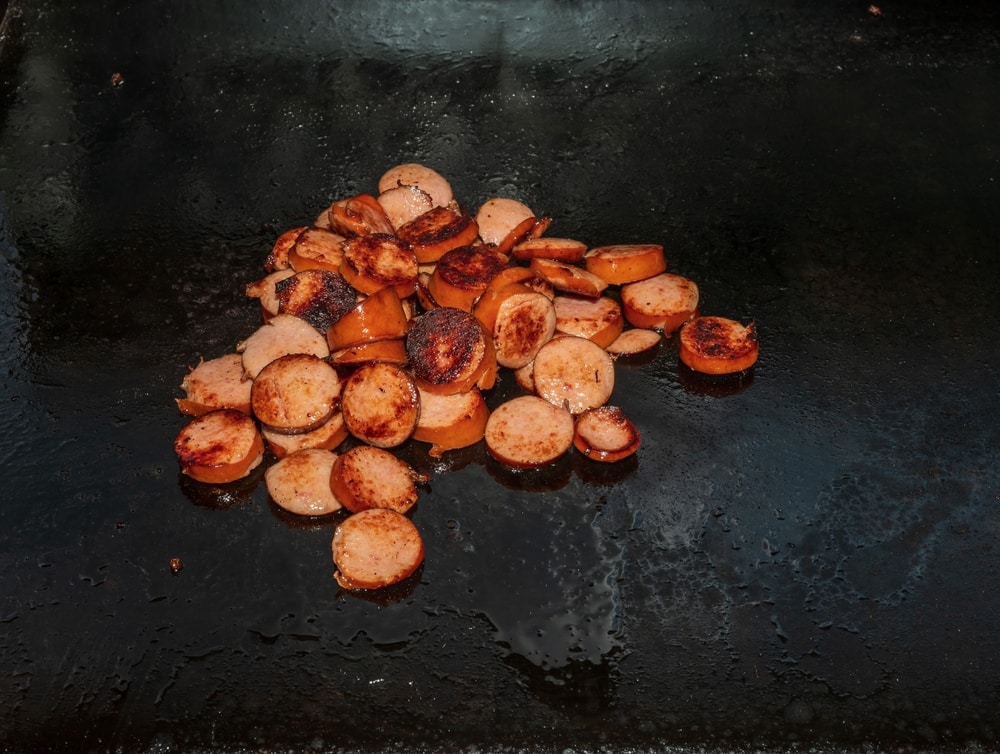