Beef is a widely consumed meat form, and the availability of various cuts makes it suitable for different recipes. However, corned beef has become the readily available and cured option, but it’s expensive. That being said, people end up asking, “why is corned beef so expensive?” In this article, we are sharing what corned beef is and why it has become so expensive!

Corned Beef – What Is It?

Corned beef is the beef brisket is cured with salt. Corned beef is made by treating meat with rock salt (large-grained salt or salt corns are used). In addition, corned beef recipes involve spices and sugar. In the majority of cases, corned beef is used as a third-party ingredient rather than a primary meat form. For curing the beef, nitrates are used, which are responsible for converting myoglobin into nitrosomyoglobin, which leads to pink color.

The availability of nitrites and nitrates will eliminate the chances of botulism during the curing process. On the other hand, if corned beef wasn’t cured with nitrites or nitrates, it would have a gray color and goes by the name of New England corned beef. Corned beef has become a famous dinner recipe and gained popularity during the First World War and the Second World War (during those times, meat was rationed). Corned beef has become famous as an ingredient in various regional recipes.

In various recipes, the addition of spices and sugar will result in soft spicy, pink, and tender flavor and appearance. In addition, we do want to add that the meat cut is tough, which means it takes a long time to cure and brine the meat. However, the salt filling technique will tenderize the meat even more. Once properly cooked, corned beef can be easily sliced and used as an ingredient. Not to forget, the corned beef slices can be served with veggies, especially cabbage.

As far as brining is concerned, it uses similar brine that’s used for making pickles, which is why it’s also named pickled beef. We are certain that we have given you enough information on corned beef, so you can easily buy the best one. However, keep in mind that corned beef also goes by the name of reuben, salt beef, corn beef, and bully beef.

Lastly, we do want to talk about the nutritional profile, which includes sodium, protein, thiamin, vitamin B, which leads to a healthier heart and improved skin texture.

Why Is Corned Beef So Expensive?

As we have already mentioned, corned beef is brined and cured, which involves labors, advanced equipment, and packaging costs. That being said, the costs will increase more than the actual cost of beef brisket. However, it’s become pretty evident that corned beef isn’t available all around the year, and the market isn’t big either. Consequently, it means that there are only a few manufacturers of corned beef, so the supply is less, and the price is increased.

Secondly, corned meat is made from beef brisket, which is a lean and flat cut, and this cut is extremely expensive. That being said, the expensive cut leads to the high price of corned beef. On the other hand, we do want to add that people use a round primal cut of beef rather than brisket to make corned beef.

For the most part, corned beef tastes like bacon and salami, but the aroma and flavor are considered more intense. The most interesting point is that corned beef doesn’t taste like a regular beef roast, which is another reason behind the expensive price tag. Coming to the main point, corned beef is known for its tender and soft texture, while the flavors are meaty, spicy, sweet, salty, and sour. Corned beef is made by balancing the ingredients throughout bringing to deliver even flavors.

As far as using corned beef is concerned, it can be roasted, boiled, or cooked. However, keep in mind that it could be too salty for some people because it’s brined and cured with salt. Some brands also offer sour corned beef which is because of the presence of nitric acid (nitric acid leads to a pinkish color and increases the shelf life). So, do you have enough information about corned beef and the expensive price tag now? 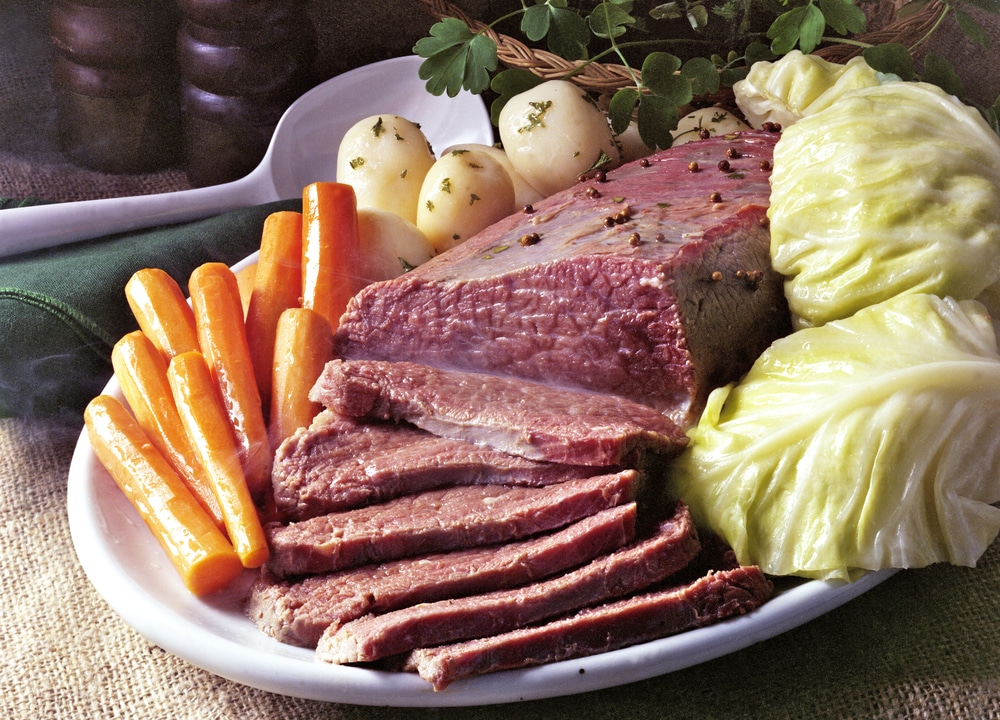