Condiments are important for enhancing the flavor and overall taste profile of the dishes. People who like spicy and hot food often turn to horseradish, but it often leads to a burning sensation. This is the prime reason why people keep wondering, “why does horseradish burn?” In case you have the same confusion, we are sharing some common reasons behind the burns!

Why Does Horseradish Burn?

It doesn’t matter if you lick it or just eat the entire thing; horseradish always burns and often stings. For the most part, it burns the nose, but people have had a burning sensation in the tongue and mouth. On the other hand, some people get stingy sensations on their scalps. If we consider the taste profile, horseradish is famous for its extremely spicy and strong flavor. The heat can be easily felt on the tongue, and some people even end up crying (it leads to teary eyes).

For the most part, it’s mixed with white vinegar, which reduces the heat a little bit. As far as the consumption is concerned, it’s prepared with salt, vinegar, and sugar, but that doesn’t reduce the burn it causes. It wouldn’t be wrong to say that horseradish has an extremely pungent flavor and aroma. It is generally served in packaged sushi and is dyed in green color. Now, coming to our main point, there are two components that cause the burning sensations, such as;

This is the first compound present in horseradish which triggers the immune system because it’s considered to be a toxin. The compound connects itself to TRA nerve cells’ receptors. Since these receptors are available in the nose, burning sensations are more common in the nose as compared to the mouth. It tends to create a flaring sensation in the nasal cavity. The prime reason behind the strong sensation in the nose is the higher volatility of allyl isothiocyanate.

This is the second compound that leads to the burning sensation. As compared to Allyl Isothiocyante, it doesn’t trigger the immune system, but it leads to intense stimuli which produce warm sensations on the skin. Then, the defense system is triggered, which leads to redness and sweat production. What’s most surprising is that it triggers the release of endorphins (the happy hormones) and creates a similar reaction one gets from heat burns from spicy food. This compound actually creates a burning sensation all over the body and is often described as tingling.

When it comes down to burning, horseradish only burns the nose through its volatile compounds. However, some people ask why it causes burn in the brain. So, the thing is that horseradish doesn’t burn the brain because there are no pain receptors there. That being said, the burning or stinging sensation in the brain is basically nasal activity’s burn which is networking around. On the other hand, if there are tingling sensations, it’s because of allyl isothiocyanate in the local nervous system.

As far as the throat is concerned, horseradish burns the throat because there are pain receptors that are activated by allyl isothiocyanate. Not to forget, there are some people who struggle with heartburn, and it’s caused by irritation in the throat and nose (it causes acid reflux, hence the heartburn).

How To Reduce The Chances Of Burning

To be honest, we could say that doesn’t eat horseradish, but it’s just too delicious for that. However, there are some tips that will help reduce the chances of burning, such as; 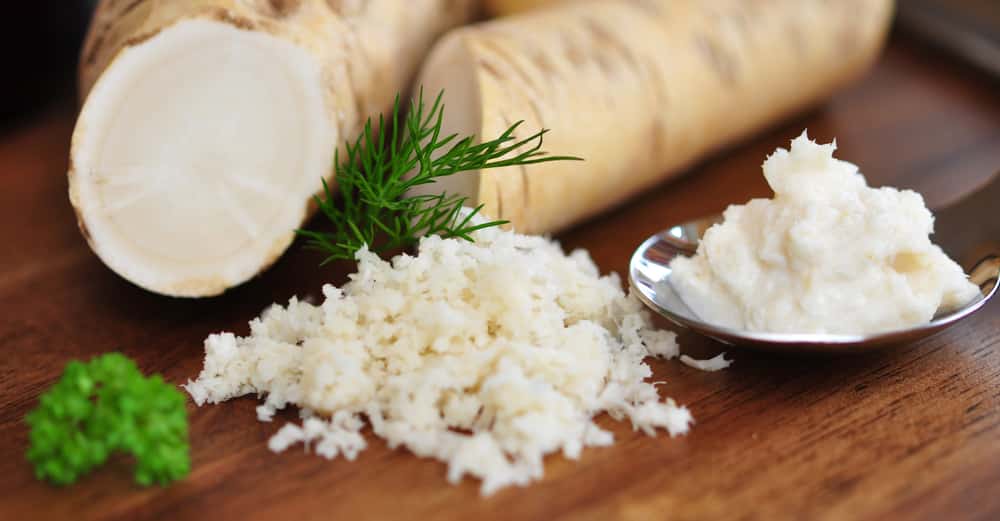