Ketchup has always been an important part of our dining table, and we always thought that tomato ketchup was the only option available. However, banana ketchup has become another famous option (it sounds weird at first, obviously). For this reason, people often ask, “what does banana ketchup taste like?” In case you have the same question, we are sharing more about the banana ketchup!

Banana Ketchup – What Is It?

Banana ketchup is also known as banana sauce and has become famous in the Philippines. This is fruit ketchup that is used as a condiment and is made with a combination of banana, spices, vinegar, and sugar. It has a brownish and yellow color, but some manufacturers use red food dyes to create a red color (got to resemble it with tomato ketchup, right?). Banana ketchup was first launched in the Philippines back in the Second World War.

It was basically launched to overcome the shortage of tomatoes and using the excessively available bananas. The most surprising factor is that banana ketchup doesn’t taste like bananas at all, even when the primary ingredient is banana. As far as the flavor is concerned, it tastes much like tomato ketchup because the other ingredients and spices are the same. In addition, it has ginger and chili spice which creates slightly hot, acidic, and sweet taste profiles.

At this point, we do want to add that homemade banana ketchup will have the banana flavor, but the commercial bottles won’t have that banana flavor. In case you are concerned about the texture, it’s pretty similar to tomato ketchup. To illustrate, it has a thick texture, but it’s not gloopy. In addition, it has easier and faster pouring. However, it has higher starchiness which comes from bananas (the commercial banana ketchup might not have that starchiness).

As far as the usage is concerned, banana ketchup can be used as you would use tomato ketchup. The majority of commercially available banana ketchup is red, but the yellow ones go well with fries and burgers. In addition, it makes a great addition to sour tofu, BBQ sauce, stir-fries, and sweet sauce. This is because the sauce has a tangy and savory taste element which takes out the best flavor. In case you are wondering about the expiry, if the bottle isn’t opened, you can use it for one month after the expiry date. As for the homemade banana ketchup, it will only last for a few weeks.

In the Philippines, it is widely used for assorted recipes, including hot dogs, torta, grilled pork, charcoal fish, French fries, hamburgers, and fried chicken. In addition, it tastes amazing with chicken skewers. It is widely exported to UAE, America, UK, Canada, Spain, Hong Kong, Australia, Switzerland, France, Kuwait, New Zealand, and Saudi Arabia. As far as the availability is concerned, banana ketchup is available in Asian grocery stores, and brands like UFC, Jufran, and Mafran have these in stock.

In case you are avoiding sugar, you can opt for the Caribbean version of banana ketchup from Baron. The best thing about this condiment is that it doesn’t need to be refrigerated and has shelf-stable manufacturing if it’s not opened. However, when you take off the seal, you should store it in the refrigerator. In the case of homemade banana ketchup, it should be stored in the fridge as soon as you make it because it doesn’t have additional preservatives.

How To Make Your Own Banana Ketchup?

For the most part, it can be used just as you would use tomato ketchup, and making it at home is pretty easy as long as you have the right ingredients. Some of those ingredients include ripe bananas, yellow onions, brown sugar, apple cider vinegar, cinnamon, turmeric, garlic, ginger, nutmeg, and cloves.

Truth be told, there are not many varieties of banana ketchup, and the only difference is different percentages of vinegar and spice. We have already talked about the traditional Filipino variety, but there is another variety that uses a small percentage of tomato paste with bananas. Thirdly, there is Caribbean banana ketchup available with a zippier and brighter flavor since it has coconut oil, curry powder, and rum. 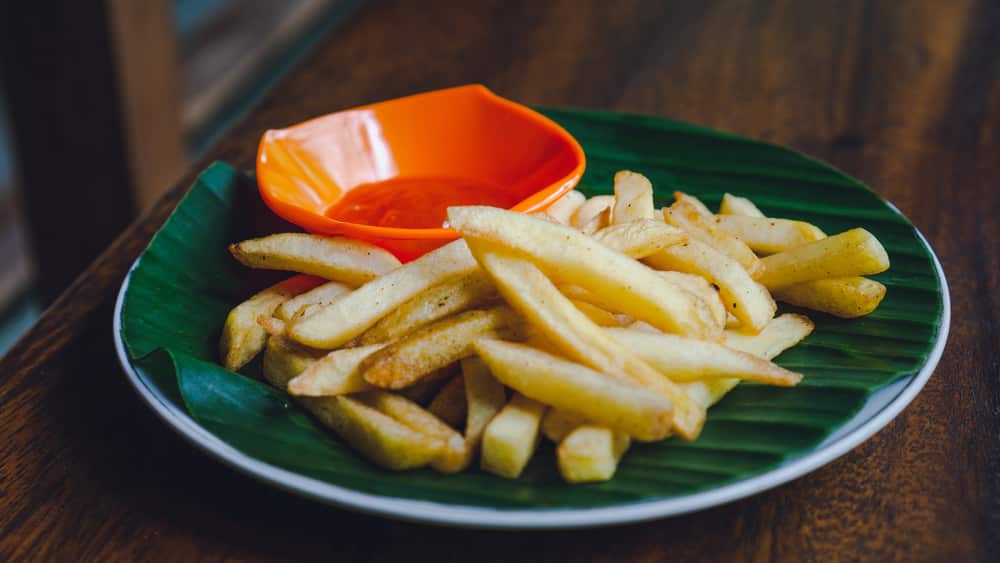