Baking soda aka bread soda is a chemical compound known as Sodium Bicarbonate (NaHCO3). It’s a crystalline salt that has a slightly salty, slightly acidic taste. The Sodium bicarbonate crystals are ground into a powder form and labeled as baking soda for commercial purposes.

Baking soda is a cooking ingredient used in flour-based batters for bread making and frying. Baking soda is mainly used as a leavening agent because of its CO2 making properties.

Baking soda (Sodium bicarbonate) is an alkaline salt meaning it can be activated when paired with a relatively strong acid ingredient like lemon juice, vinegar, buttermilk, cream of tartar, and yogurt. When activated with a liquid acid ingredient, baking soda produces CO2. If this CO2 making mixture is used inside a bread batter, the CO2 emitted gets trapped within the batter, allowing it to rise and get double in size within a period of just a few hours.

Baking soda also has a decomposing temperature. Baking soda decomposes into gas molecules when heated at temperatures above 80 degrees Celsius. The process of decomposition is purely heat-based and does not require an acid ingredient. This is why baking with a small amount of baking soda creates a fluffy, airy loaf of bread.

What Does Baking Soda Do When Frying?

What happens when you add baking soda into a frying batter?

To explain why people use baking soda when frying, we will have to first explain the frying principle.

Frying occurs when food is dumped into a pot of oil that is heated to temperatures above 100 degrees Celsius, preferably around 170 to 220 degrees Celsius. When food such as battered chicken wings or pakoras is thrown into temperatures that are a hundred degrees higher than the boiling point, water molecules on the surface of these food items start to rapidly evaporate. The rapid evaporation of water molecules creates multiple steam jets that protect the inside of your food from the surrounding oil. It also buys time for heat to seep into the inside of your food and creates a crispy brown crust by evaporating the surface moisture. As a result, you’re left with crispy, juicy, deep golden-colored chicken wings or pakoras (fluffy not juicy).

Baking soda in a frying batter

The acid inside the batter activates the baking soda which then produces large amounts of CO2. CO2 inside the cooking batter then creates an airy product.

Frying a CO2 rich batter creates a crisper, fluffier end result. Because CO2 inside the batter and gas molecules – produced when baking soda is heated to 200 degrees Celsius – provide more support to water molecule steam jets, and as a result, we’re left with a better, tastier product.

Make sure not to leave your baking soda infused frying batter inside the fridge for more than 2 hours. Because unlike bread batter, liquid batters are not designed to trap the CO2 gas molecules. 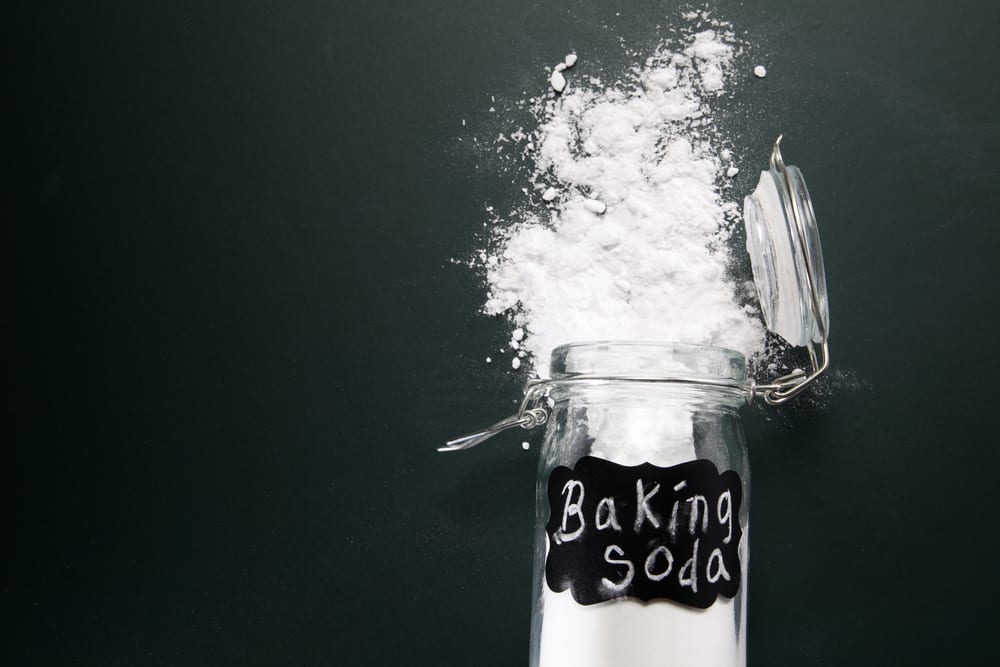