What to do if you’re using a recipe that calls for using green chilies, but the store/supermarket is out of green chilies? Fear not, there are a plethora of chili types that can be used as a substitute for green chilies.

We have decided to substitute green chilies with red or yellow chilies. There are a lot of red and yellow chili varieties/groups. So for the sake of simplicity, we are going to discuss a few varieties that are used to create edible dishes.

Chilies that get a red color when fully matured consist of bird’s eye chilies, jalapeños, cayenne chilies, serrano peppers, bell peppers, and many more. Red chilies are slightly-hotter that their green counterparts. They are also less bitter than green chilies of the same variety/group.

If you’re tired of eating mild, flavorless green chilies, and are looking for something that will burn your mouth, the bird’s eye chili aka Thai chili is a suitable alternative.

Thai chili is most-commonly grown in Ethiopia and Southeast Asia. But unlike its two birthplaces, the tongue-burning Thai chili is only found in Asian recipes. Vietnamese people use this chili to make salads, soups, and stir-fried dishes, whereas Thai people use it in their Thai-salads and Thai-curries.

Bird’s eye chilies are known for their spiciness (50,000 to 100,000 Scoville) and fruit taste. Its taste is further enhanced when the Thai chili is allowed to ripen into a bright red color.

Unlike the extremely hot Thai chili, cayenne pepper is a moderately-hot chili that is used to flavor dishes.

Cayenne chili peppers are moderately-hot with a Scoville level equal to 30,000 to 50,000 Scoville.

Originated from the Mexican mountainous regions of Hidalgo and Puebla, the pepper is named serrano as a reference to the Sierras Mountains of Hidalgo and Puebla regions. Similar to Thai chilies, unripe serrano peppers are also green colored. But upon maturity, the color can change from green to red, brown, orange, or yellow.

The serrano peppers are slightly hotter than jalapeño peppers having a Scoville rating of 10,000 to 23,000 Scoville. The peppers are eaten raw or used in making salsa and pico de gallo.

Chilies that get a yellow color when fully-matured consist of Bolivian rainbow pepper, lemon drop pepper, aji Amarillo, aji charapita, prairie fire pepper, Hungarian wax pepper, and many more. Yellow chilies are slightly-hotter that their green counterparts. They are also slightly-tangy than green chilies of the same variety/group.

Hungarian wax peppers are almost as hot as jalapeño peppers. The peppers have a banana-like shape and a tangy sweetness that comes from its natural ripening process. Since the peppers are not overly spicy, they’re great to start experimenting with spicy foods.

A Bolivian rainbow pepper, when ripe, can have a yellow, red, orange, or purple color. Bolivian Rainbow peppers have a cone shape and a flavor profile similar to cayenne peppers. 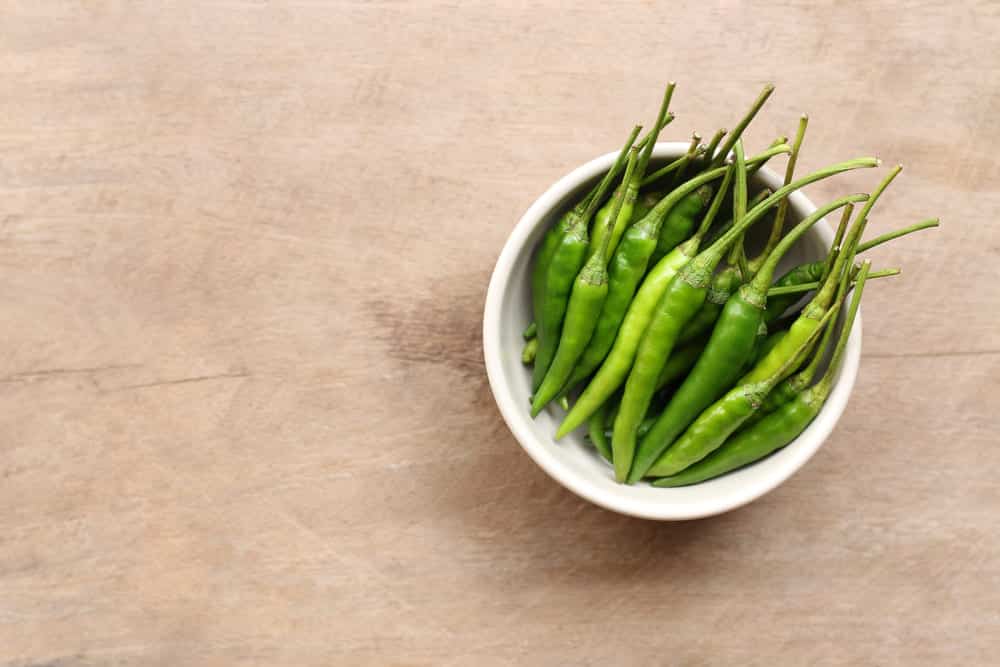