At times it doesn’t matter how diet conscious you are or how strict your eating plan may be. Saying no to cheese is impossible.

It’s one of the world’s favorite food types, with countless tasty types lining the fridges and shelves of your nearest supermarket.

White cheddar cheese is an indispensable ingredient to any ardent chef.

There’s nothing much that can compare to a good white cheddar but if you have just run out and have no choice but to serve your guests – here are some of the best possible substitutes for white cheddar cheese. 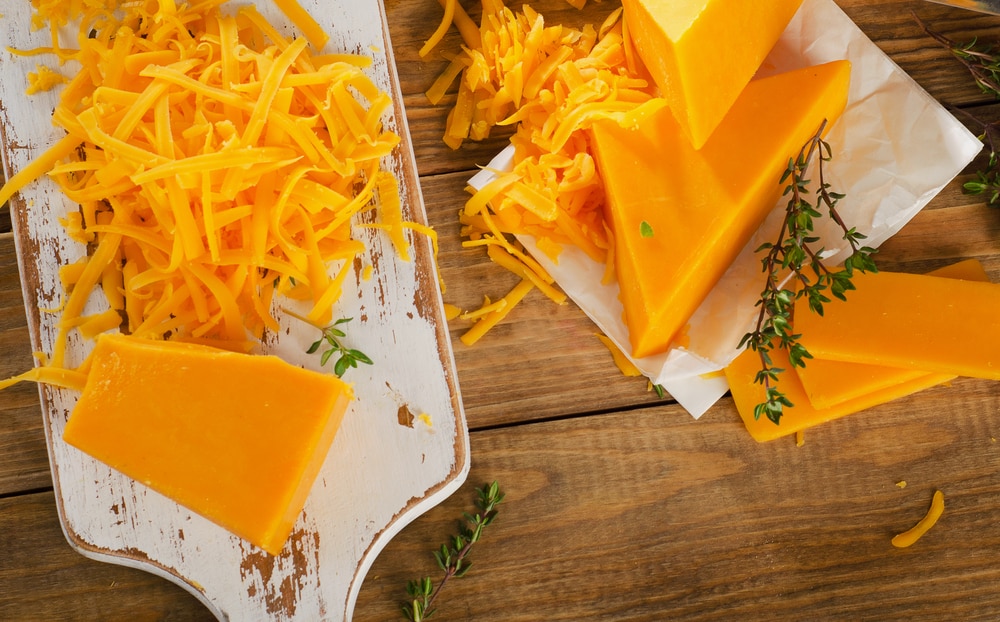 White cheddar and yellow cheddar are the same things. The only thing that makes yellow cheddar a different color is the added annatto food coloring, and that doesn’t change the taste or texture.

Annatto is a natural food coloring derived from the red seeds of the achiote tree native to South America and Mexico.

Dairies use this tropical food coloring to give cheese its consistent yellow to orange color that we know. Only age changes the flavor of the cheese.

White and yellow cheddar of the same age are identical in all ways. Yellow cheddar should always be your number one alternative. The first white cheddar substitute that most fall in love with is Colby cheese.

Colby, otherwise known as Colby Swiss Cheddar, mimics the characteristics of white cheddar closely despite being a yellow cheese. It is slightly softer and a little less intense.

Moist enough to remain gooey when melted just like its counterpart, Colby cheddar is versatile enough to replace white cheddar in most meals.

While the mildness, taste, and meltability are all a match, you’ll find that Colby is slightly creamier. Go for Colby cheese as a replacement where the cheese is served cold or uncooked.

It’s a fantastic salad cheese, and tastes great when grilled but doesn’t cook into casseroles, sauces, stews, and other cooked cheesy meals too well.

Tillamook is milder than Colby, and great melting cheese. It’s the same family of cheese as white cheddar, sharing almost all the same attributes.

The key hallmark of Tillamook is just how moist it is, translating to a sticky, gooey melt that’s ideal for any meal that calls for melted cheese as a filling.

Grilled cheese with Tillamook and your favorite finishings is a near match to a white cheddar melt. You’ll find Tillamook to be slightly sharper than white cheese and not as creamy as Colby.

It’s one of the most versatile white cheddar replacements out of all your options. Uncooked or cooked, sauce or stringy melt – Tillamook works. 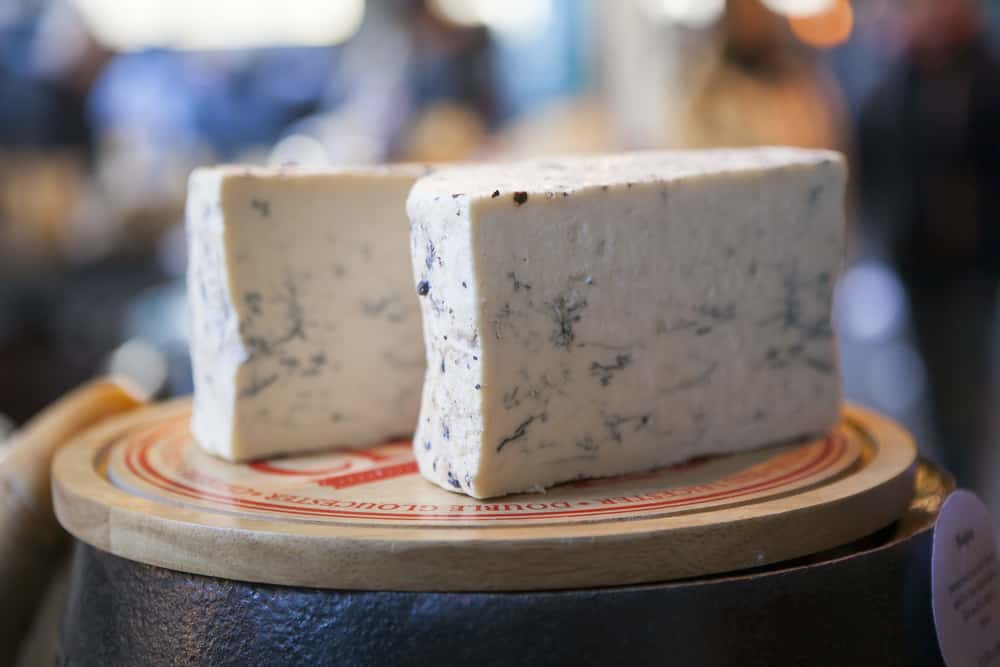 Double Gloucester cheese made from full-fat milk is a great replacement for white cheddar. Pasta, sauces, and any meal where the cheese cooks into a fusion of flavors is suited to the creaminess of this firm, savory option.

It’s one of the sharpest replacements that melts away instead of becoming stringy and gooey. This makes it one of the best cooking cheeses around while remaining just a little stronger than white cheddar.

Expect a buttery, intense flavor but make sure to get the unblended type and avoid single Gloucester. It’s a crumbly, contrasting option unsuited to replacing white cheese.

The richness of Double Gloucester is great for cooking but comes with a nuttiness that most other cheeses don’t have. 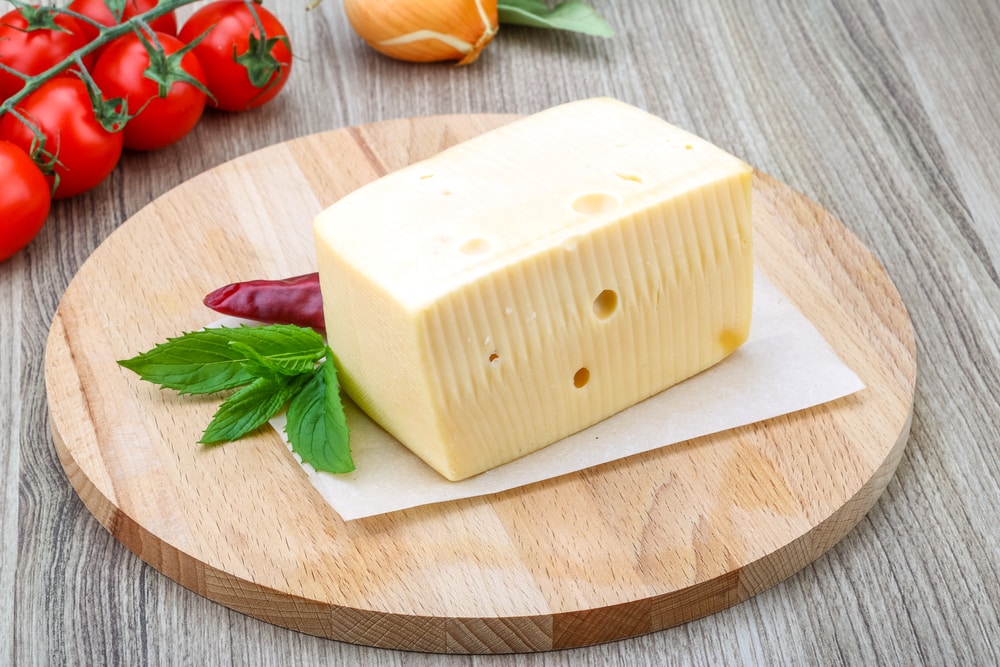 Brick cheese is stronger than other alternatives but melts incredibly well. This tangy cheese originating in Wisconsin’s color varies depending on its maturity.

Ideally, the paler varieties are a better replacement for white cheddar than their yellower counterparts. If you get just the right intensity, the taste is almost identical to a mild white cheddar.

Pick brick cheese if you’re looking for stringiness and meltability. Slicing up your cheese and melting it? Go for brick cheese.

You’ll never be able to tell the difference other than the slight funk known to fans when making dishes like pizza and cheesy casseroles. 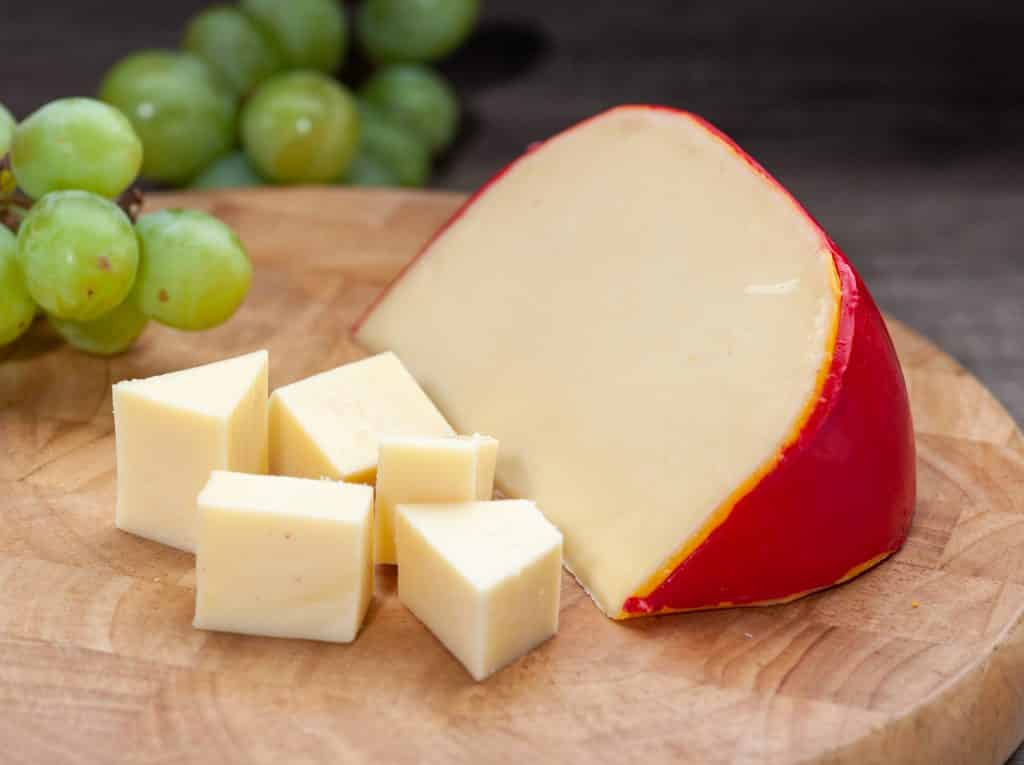 Semi-hard Edam cheese originating in the Netherlands may be harder than white cheddar but it cooks and grates great. It’s a little milder but not as mild as Gouda.

Edam’s creaminess makes it a great accompaniment to meals using multiple kinds of cheese. It’s not typically intense enough to be used alone unless being used in a sauce or pasta, melting away rather than becoming stringy.

After all, Edam is a low-fat alternative. You don’t have the bite of cheddar but you’ve all the other qualities that make white, hard cheese such a favorite. Go for aged Edam if you’ve got an option, as it sharpens over time. Cantal is a hard French cheese with a distinct flavor of its own. Cantal’s tanginess makes it a favorite of fans of stronger cheeses.

If you’re into mature cheddar cheese and need a white cheddar substitute, you may never turn back to cooking without Cantal again. The main difference is the milky aftertaste that prevails after each bite.

At first, one could confuse the creaminess for white cheddar until the slight funk and lingering dairy of Cantal comes through.

Cantal works wonderfully in sauces and is a leading choice for fondue. While it takes a little longer to melt, gourmet sandwiches and other melts have an unforgettable flavor of their own. Gouda, like yellow cheddar, is at times colored. Firm but springy, Gouda melts easily. Cheaper varieties are unmatured and have a mild taste and texture that’s very similar to white cheddar.

Its meltability, mildness, and firmness make it a good substitute for most purposes. The only thing that cheddar fans will dislike is just how mild Gouda is.

In this case, opt for a mature block of cheese. When well-aged, Gouda will develop Tyrosine crystals just like good quality, mature cheddar. White cheddar is stronger, sharper, and creamier than mozzarella. However, the pungent mildness and extremer meltability of mozzarella make it a winner in so many situations.

Atop a pizza, casserole, or even in a sandwich, mozzarella will work well and is often preferred to white cheddar. We recommend using a bit of both or combining mozzarella with a sharper cheese.

The milky sweetness grants a different flavor profile, which will either be elevated or completed lost depending on the meal you’re making.

The more mozzarella ages the softer it gets but at the same time the subtle hint of sour becomes stronger as well, so be mindful if shopping for cheese. Gruyere’s mild creaminess makes it a match to meals that call for white cheddar. It’s the creamiest out of all our suggestions, which may be a little too creamy for some.

Sweeter than cheddar and nowhere near as sharp, it’s Gruyere’s ability to fuse with flavors granting them texture and taste that makes it a worthy alternative.

When baked, Gruyere becomes very gooey, another reason for opting for this high-end cheese in casseroles and gourmet bakes.

If you’re including this Swiss delicacy uncooked on a sandwich, platter, or atop another meal, slice thinly and work conservatively because the flavor and consistency can become overwhelming if too much is eaten at once.

These substitutes will all take the place of white cheddar cheese if you don’t have any on hand or your favorite store is sold out. Not all cheeses are made equal, so pay close attention to the taste of each brand that you buy.

It may take a few tries to find the right cheesemaker to give the texture, taste, and consistent quality that you’re looking for.

Finding the right cheese is all a matter of personal taste, but we’re confident that you’ll find a favorite alternative among the suggestions provided above. 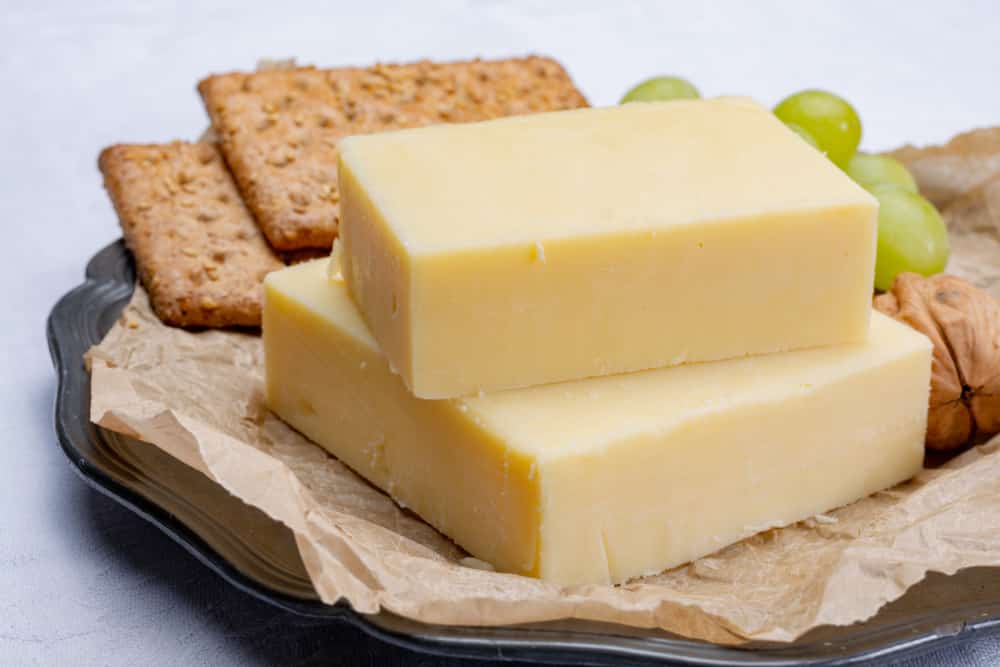