Searing is one of the most important processes included in the cooking process. It is known to add a crispy and crunchy crust to the food and adds some color to the food. However, to ensure proper searing, you need to choose between Sansaire searing kit vs. Searzall searing torch because these two are the most common searing devices on the market. So, let’s check out the features to determine if it’s the right choice for you or not!

Searzall is one of the best choices when it comes down to finishing off the sous vide meals once you are done with the cooking. This is because the torch can sear, caramelize, and char the dish. It is a searing torch that is connected to the top of your blow torch, resulting in the attainment of an apt searing temperature. For the most part, it is used for protein meals, including steaks. Searzall searing torch tends to create a thin flame, which usually results in uneven searing.

On the other hand, the manufacturers have added two high-temperature resistant and fine layers of wire mesh to ensure consistent and even distribution of the flame. As a result, the flame will be able to finish the sous vide meat as well as other food items. The searing torch can be used to ensure professional outcomes. The back screen of the searing torch is coated with palladium, which delivers higher resistance to oxidation and temperature.

This is actually a hand-held device, which leads to delicious and efficient meal preparation to make sure the meat’s skin is seared to perfection without cooking the inside of the dish. However, when you first blast the heat with the searing torch, you have to wait for a few seconds as it helps users achieve the correct color on the meat. It is around 5.3-inches long and weighs only 0.55 pounds, so you can easily handle the searing torch even if you want to sear the bigger dish.

It wouldn’t be wrong to say that it’s a dominating searing torch that has the capacity to sear the steaks and caramelize the crème Brulee. It has extremely even flame dispersion and leverages shallow heat to make sure you have better control of the flame, resulting in just-right temperature output. The integration of the wireframe enhances the shielding and protection. However, you will need to connect it with a compatible gas cylinder, so you can sear without any errors.

If you are ready to caramelize and sear your ham and turkey while adding crispness to the rib roast, there can be nothing better than Sansaire searing kit. It wouldn’t be wrong to say that it’s a beefy blowtorch with cutting-edge outcomes. It is designed in torch form, promising better searing outcomes. This torch is designed with a concentrated flame, so you can create a darker sear on the food, but it also has optimum flame diffusion.

Sansaire searing kit is integrated with a white and smooth design, which makes it a modern design for your kitchen. The torch is highly modified and has an ergonomic handle. You can use the torch on the pork fat, and it will perfectly crackle to ensure the soft and juicy layering on the meat. The torch is integrated with the wide black & white propane bottle that not only looks amazing but stands well on the kitchen countertop for easier use.

There is a flame adjustment knob designed on the torch, so you can personalize the flame according to your food, making it equally suitable for pork and crème Brulee. The best thing about Sansaire searing kit is that it has a searing rack made from stainless steel to ensure easier storage. In fact, there is a drip tray to ensure easier cleaning. According to the majority of customers, it’s one of the most powerful searing torches designed for home use, but it can be used by chefs as well. As far as the cylinder is concerned, it tends to last for months, even with regular use, and after that, you can refill the propane cylinder.

The company has manufactured this searing torch in collaboration with BernzOmatic, a company that’s been around since 1876, which means you will get the value for your money. Overall, it’s a well-built searing torch that looks amazing and performs well! 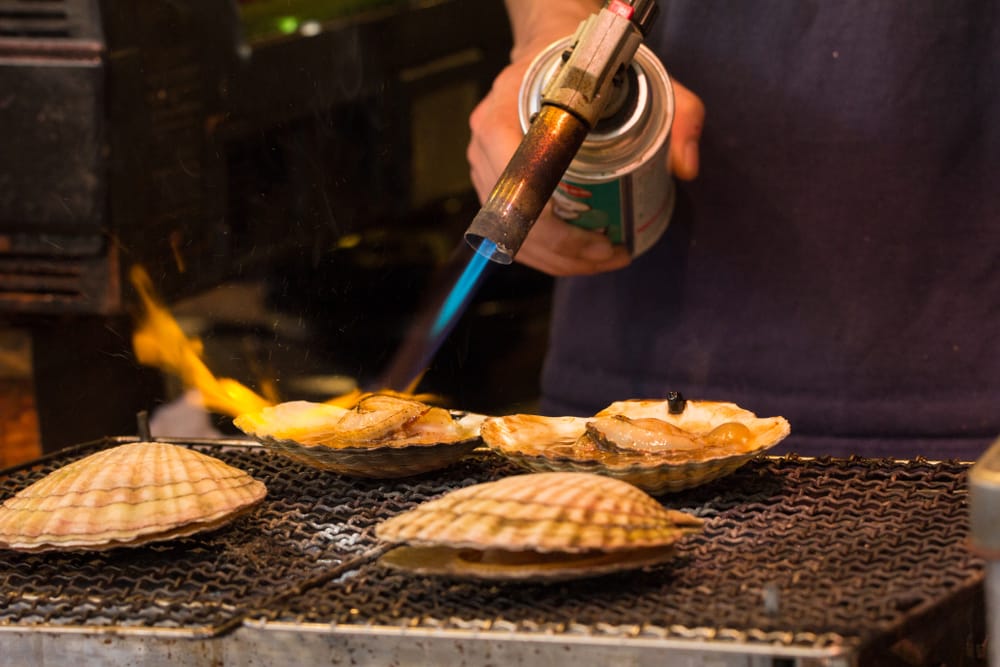