Dishwashers have become an absolute blessing for people who don’t like getting their hands dirty to wash the dishes. That’s because the dishwasher can clean the dishes while you do other chores. Thermador dishwashers are the most popular units for households, but for it to clean the greasy dishes properly, you need to use salt for the Thermador dishwasher. However, if you don’t have an idea about the salt or haven’t used it, we have a full guide for you!

How To Use Salt For Thermador Dishwasher?

The dishwasher salt is basically the crystalline and granulated sodium chloride that’s responsible for regenerating the dishwasher’s water softening circuit. This salt is known to regenerate the ion exchange resins that remove the magnesium and calcium ions (these ions are usually added if you use hard water). As a result, the water is softened to make sure the dishes are cleaned well and aren’t damaged by exposure to hard water ions.

The dishwasher salt has a granule size bigger than regular table salt, which results in slow dissolving. In addition, since the granules are small, they don’t block the softener unit. Keep in mind that the dishwasher salt cannot be used for cooking as there are chances of some toxic elements. As far as Thermador dishwashers are concerned, they are designed with a water softener that removes magnesium and calcium ions from water.

The location of the salt compartment varies with which Thermador dishwasher model you are using, but it’s usually on the bottom of a wash cabinet. In addition, if your dishwasher has an automatic sensing system available, it will notify you if there is a need for dishwasher salt. Make sure that you always add enough salt to make sure the magnesium and limescale deposits don’t build on the kitchenware (the deposits are more evident in glassware, by the way).

Secondly, the dishwasher salt is made from 100% sodium chloride, and there are no additives. On the other hand, table salt tends to have anti-caking components, which can damage the mechanical parts of the dishwasher and create hard water stains on the dishes.

How Does Dishwasher Salt Work In Thermador Dishwasher?

The Right Way To Use Dishwasher Salt

The dishwasher salt is specifically formulated for dishwashers, and there is a separate salt compartment that’s used to add the salt (yes, the compartment is filled with the salt, closed, and the latch is closed). Keep in mind that you cannot pour cleaning agents or detergents into the salt compartment because it can damage the water softening system of your dishwasher. 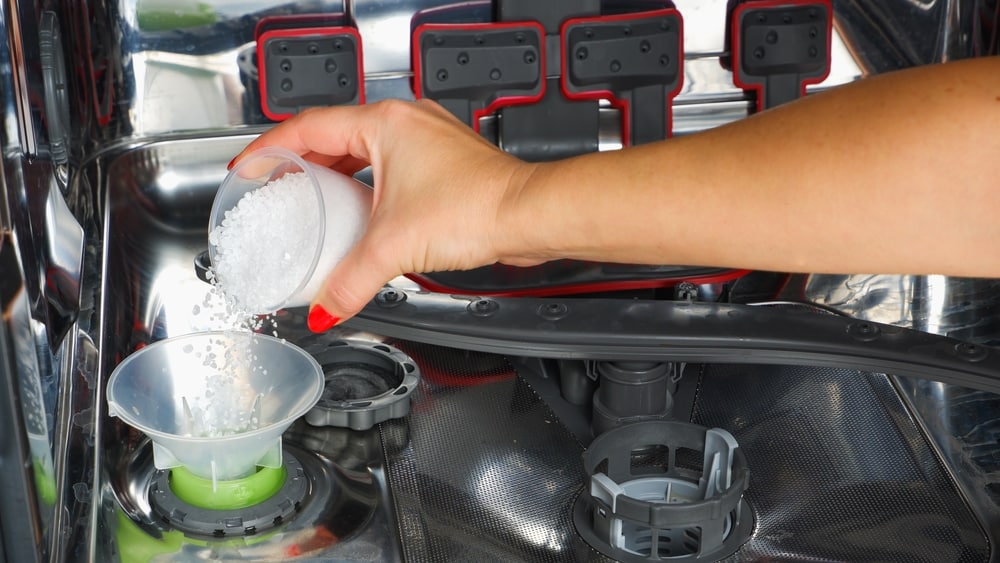