Pans are essential for every kitchen, but the type of pan used in the kitchen depends on what cuisine you like to cook. For instance, people who are fans of Spanish food will have a paella pan in the cabinets, while people fond of Asian cuisine will have the woks. However, what’s the difference between these two pans? In case you want details, we are sharing paella pan vs. wok comparison in this article!

A paella pan is widely used for cooking Spanish meat and rice. For the most part, it’s known for its wide and shallow design. To illustrate, these are flat and wide pans and have a sloping edge. There was a time when the pans were made from iron and were more affordable. However, that required extensive maintenance, which results in crunchy and slightly sticky rice. It wouldn’t be wrong to say that the paella pan has a unique shape while the wider surface promises in-depth cooking.

The best thing about a paella pan is that it eliminates steam and water from the food. In fact, the paella pans were designed to cook rice with a drier texture. In addition, Spanish cuisine has a recipe named paella, which is the yellow rice dish and is only cooked in this particular pan. For the most part, the paella pans are made from carbon steel material and have an extremely thin configuration. Having that said, these pans are extremely responsive to changes in temperature.

For instance, it can shift the blasting heat to a simmering form within a matter of seconds. On top of everything, these pans are extremely large in size, so you can cook your desired rice in the thinnest layer without any pressure. Even more, there is no pressure building which means that rice won’t release any starch. It’s quite evident that paella pans are only used for making paella, but they work equally amazing for roasting and sautéing.

As far as the price point is concerned, the paella pan is reasonably priced and can be used on open fire and grills. We have already mentioned the conventionally used materials, but they are also made from stainless steel and nonstick configuration (who doesn’t like the ease of cleaning that comes with nonstick pans, right?). In case you are concerned about the size, their diameter ranges from eight inches to 60 inches, depending on what you need or how much you need to cook!

If you are a person fond of Chinese and other Asian cuisines, we are sure that you will be aware of the wok. The wok is defined as the cooking pot with a deep and rounded bottom that originated from China. It’s extremely common in China, Southeast Asia, and East Asia. They are used for using different cooking techniques, including deep frying, stir frying, pan frying, steaming, braising, stewing, searing, roasting, and smoking.

When cooking with a wok, you can use ladles or spatulas, while the long handle promises a well-protected cooking experience, especially when using high heating temperatures. A wok is actually known for its unique shape. For instance, the classic woks are designed with rounded bottom, while the hand-hammered woks are designed with a slight flare on the edges, making them suitable for pushing food around during cooking.

If you purchase woks from some western locations, they are highly likely to have flat bottoms, which makes them similar to frying pans (the deep pans). These flat-bottomed woks can be used on the electric stoves, but if your wok has a round bottom, it needs to be used on the gas stovetop. Since we are already talking about the design, let us tell you that they range from 300mm to 360mm in diameter, but the home-use woks will be maximum of 200mm.

The smaller woks are sufficient for faster cooking techniques that use high temperatures, including stir frying. On the other hand, the bigger woks are widely used in community kitchens and restaurants for boiling water, cooking rice, and making soup. For the most part, these woks are made from cast iron or carbon steel material (the first one was more common in the past, though). As far as the handles are concerned, there are stick handles and loops handles. To illustrate, the stick handles are longer while the loop handles are smaller. 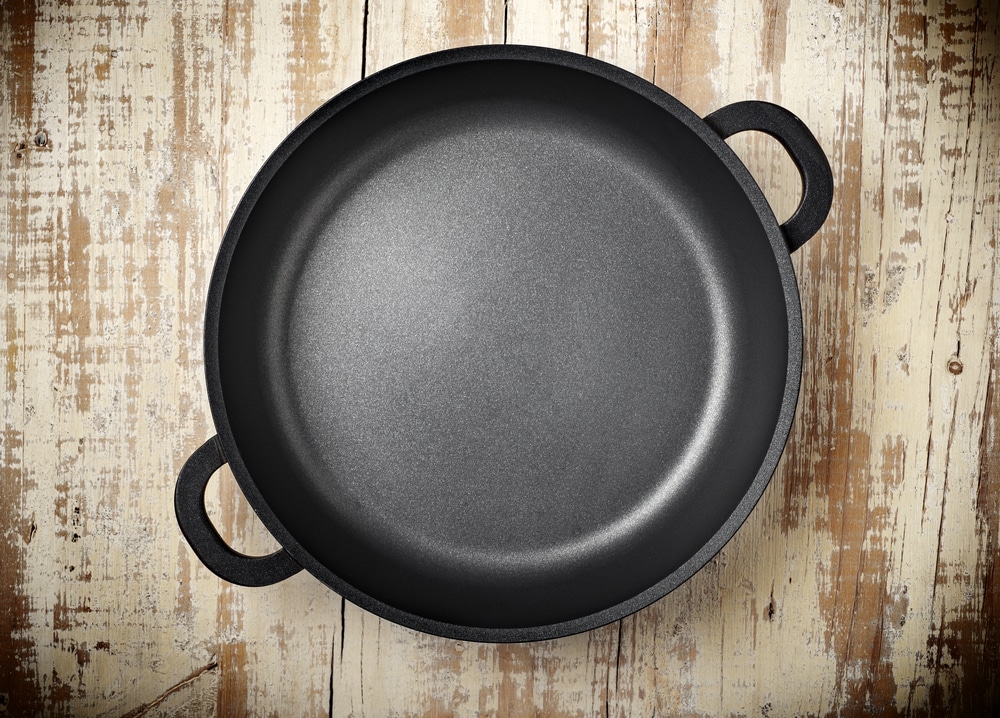