Maytag has been around for well over a century, having been formed right towards the end of the 1800s. To be more specific, it was founded in 1893 and has been through many changes since its initial formation.

But none of them are of any use if the machine itself won’t spin around to clean and/or dry a user’s laundry properly. If you’re encountering a similar problem and your Maytag Centennial washer won’t spin, here are the best few solutions worth trying out.

Washing machines as large as the Maytag Centennial are usually sized well enough to handle large loads of laundry with ease. However, that doesn’t mean they’ll be able to handle just about anything you throw into them regardless of size and quantity.

Putting too many things or putting one thing that is very large can cause problems like this one with the Maytag Centennial washer, causing it to not spin even when users prompt it to do so. The reason behind this is fairly simple and easy to understand.

Whenever there are too many clothes or other pieces of laundry, or whenever there is one huge piece, in particular, it can stick to one side of the washer. When uneven loads like this are put into washers, it jams and doesn’t spin regardless of how many times users press buttons in order to get it to do so.

That’s because all the laundry settles on one side during the wash cycle, causing the Maytag Centennial washer to stop. All that users need to do to fix the problem is stopping the wash cycle and distributing the laundry evenly across all sides so it doesn’t jam in this way once again.

On every Maytag Centennial washer, there is a handy lid switch that is meant for safety purposes. This switch allows the machine to figure out when everything is sealed up and when it is time to start specific processes. When the lid isn’t sealed, the machine won’t commence the spin cycle. This can lead to problems such as this one.

While it is certainly a handy thing, as already mentioned, the lid switch can also be very problematic at times since it leads to issues like these ones. Luckily this only ever happens where there are problems with the plastic tab meant to keep the lid switch in place, and these problems are very easily fixable by simply getting a replacement. A replacement lid switch itself can also be necessary sometimes, but luckily both are easily found.

The drain hose being all clogged up is another very common reason behind the Maytag Centennial washer not spinning like it is supposed to. Luckily the problem has a very easy solution. All that users need to do is inspect said drain hose to make sure that there isn’t kind of clogged-up mess on the inside. This can easily be done by playing your eye on one end of the hose and then placing the other near a source of light. If you’re able to see the light somewhat clearly, this means that it isn’t clogged.

However, if you can only see the light partially or not at all then there’s no doubt the hose is clogged up by something. This is an especially common problem for all those that use hard water for their laundry, as this kind of water can cause calcium to build up in the hose and clog it. Check the incoming hoses for clogs as well, as any problems with these are sure to prevent the Maytag Centennial washer from properly spinning.

If you’ve checked the hose and are completely sure it isn’t clogged in any way, try to run the Maytag Centennial washer once again while having some pieces of laundry inside. After trying to run it and after making sure that it still isn’t spinning properly, stop the cycle mid-wash and open up the lid. Now lean in to inspect the washer drum carefully.

It is very possible that there is something inside of this drum that is preventing it from moving properly, which is ultimately preventing the Maytag Centennial washer from spinning. This stuck item could be some debris or it could be a piece of clothing altogether, or maybe a combination of both in the form of something causing the clothes to get stuck in the first place.

Either way, inspect the washer drum thoroughly in order to remove whatever is causing the washer to not spin.

The final solution would be to get a professional to help you check out the drive belt of the Maytag Centennial washer, or maybe do it yourself if you’re certain you won’t cause any damage to the machine while doing so. Users will find this belt located under the back panel of the washer.

Remove this panel and then make sure that the belt is properly connected to the pulley system. Even if it isn’t, all you’ll need to do is tighten it a little so that it is now properly connected, and so that the Maytag Centennial will spin from now on. 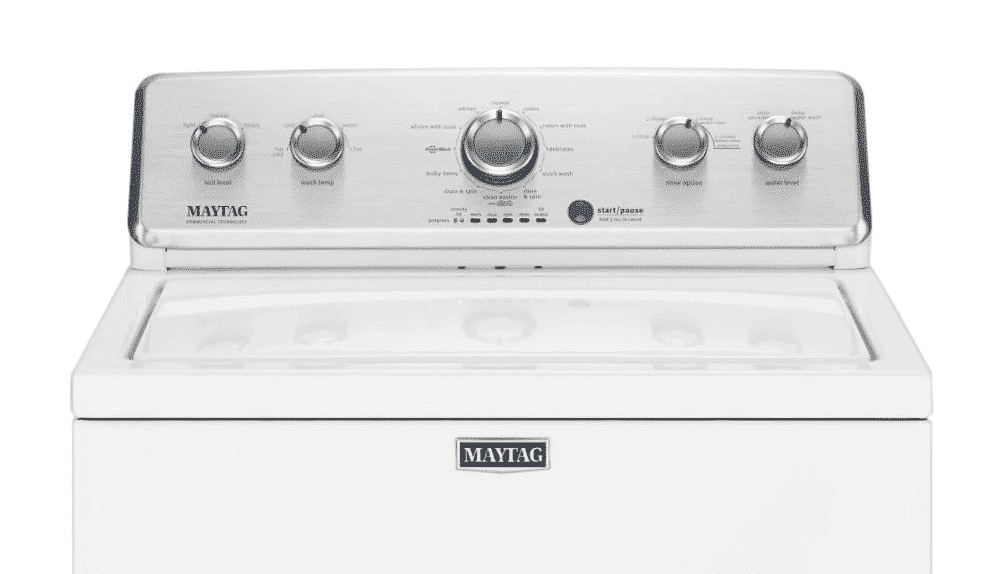