Sous vide cooking has become a common practice for people, particularly among people who like to experiment in the kitchen. However, the sous vide cooking is incomplete without a sous video cooker which is why we are talking about Inkbird vs. Anova sous vide cookers in this article – these two are the most promising cookers available in the market that are perfect for beginners as well as professional chefs.

So, let’s see which sous vide cooker is the right choice!

The sous vide cooker can be connected with the smartphone app, which allows the users to control and monitor the cooking performance from far away.

The app is not mandatory, but it sure eases the cooking experience – the smartphone app is available for Android as well as iPhone users. However, you can easily set the temperature and time on the sous vide machine. This is because there is a small LCD display that shares information about the temperature and time, and there are buttons available that help customize the settings. However, with the app, you can check out some sous video recipes as well.

The sous vide machine has been integrated with a Wi-Fi feature, which can be connected to your wireless network and control the machine. The best thing about this machine is the noiseless function and performs effective water circulation. The temperature is extremely accurate, and it’s an affordable machine that provides value for money. However, some users have complained about slow heating, but it happens when there is too much volume to heat.

The initial temperature setup can be challenging because you have to press the set button on the device a few times, but once the machine is regularly used, you won’t have an issue. In fact, it is designed with a clip that can be used to install the sous vide cooker to the cooking pot, but the clips are not removable. Overall, it’s an average-priced machine with effective functionality and amazing cooking outcomes.

Anova is a well-known name in the culinary industry, and they have designed high-end sous vide precision cooker that allows the users to complete their sous vide cooking experience. It can be connected with the smartphone app as there is a Bluetooth feature. The app is integrated with more than one thousand recipes, making it a great choice for beginners. In fact, you can share the recipes with your friends.

There are some video tutorials available. Once connected with the smartphone app, you will be able to receive notifications regarding sous vide cooking, even when you cannot attend to the cooking pots. The users can choose the doneness level, depending on what they are cooking. The temperature range of this sous vide cooker ranges from 77-degrees Fahrenheit to 210-degrees Fahrenheit. In addition, it has a pump speed of over 1.2GPM, and the directional pump can move in 360 direction.

The sous vide machine works pretty great as long as the food is no more than 19 liters, and the timer can be set for over 99 hours – it’s pretty reasonable. The sous vide precision cooker by Anova is designed to operate on 110VAC to 120VAC connection and promises a heating power of approximately 800W. In addition to the Bluetooth feature, there is a Wi-Fi connection and onboard controls, which allow the users to control the entire cooking process.

The precision cooker has been designed with a compact design and is known to have a half plastic and metal cylinder. There is a special clamp installed on the sous vide machine, which can be used to connect the machine with the cooking pot. In fact, the majority of metal parts can be detached from the main body, which eases the cleaning experience. The topside has been integrated with a black and glossy panel with an upward design, which looks pretty classic. 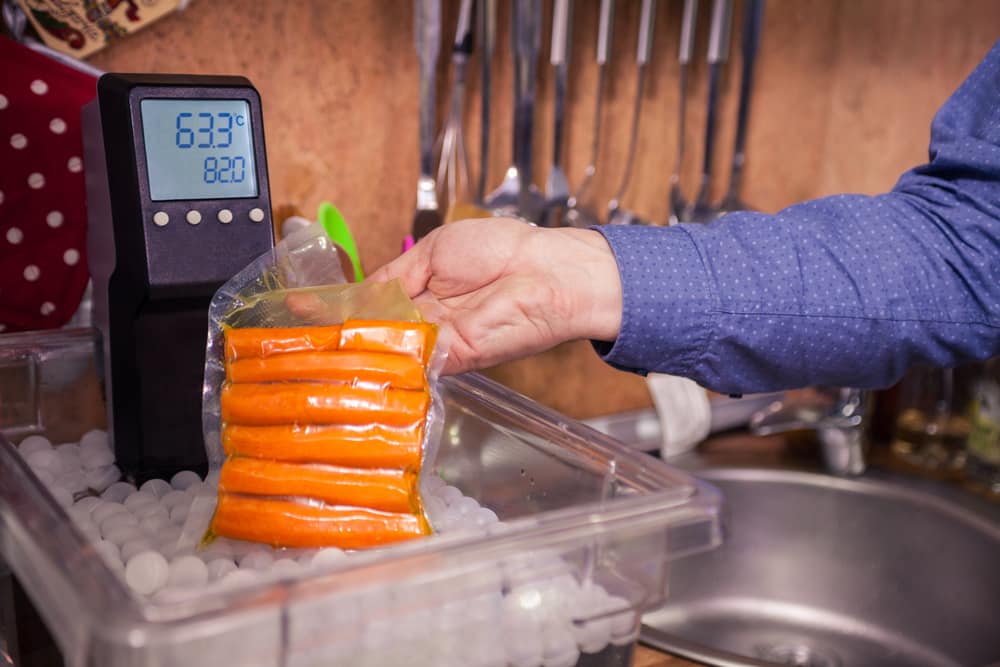