A cast iron is definitely not a tool that needs any sort of introduction if you spend time in the kitchen. It’s a very common kind of pan which is used for a number of different things, and it comes in quite handy. It is a very simple and reliable tool and there aren’t many problems that one might face while using it. However, there are occasional issues despite that. One such includes sticky surfaces on your cast iron. If you’re one of many users encountering such problems and wish to figure out how to fix a sticky cast iron, read the guide below to find out.

What Causes a Cast Iron to be Sticky?

Before we get down to solving the issue, the most important thing is learning why the issue is there in the first place. To figure this out, we’ll be discussing some potential reasons for this mess. These might also help users avoid problems such as these in the future, which is an added bonus. There are a couple of main reasons why the surface of a cast-iron might be sticky. This refers to things such as there being excess oil on the cookware.

This is something that can happen due to improper cleaning. Not taking care of the cast iron properly ultimately leads to it becoming sticky over time. That’s because all the leftover residue from food and the leftover oil as well develop a sticky texture. This leads to this issue and is probably the most common cause for it.

However, it is not the only main cause out of them all. There are other reasons for this issue as well. The other main one which is just as common, if not even more so, is applying oil or other liquids on the cast iron when it’s still cold. This leads to sticky situations such as this well, which is why it’s highly recommended that you only apply things on cast irons when they’re hot. That’ll help prevent problems such as these. So, now that this is out of the way, allow us to move on to how to fix a sticky cast iron.

There is one great method for fixing a sticky cast iron that tends to work in just about any case. This refers to making the most out of your oven so that it takes care of everything for you through its heat. All you have to do is put the cast iron inside of the top rack of the oven. It is recommended that you do so by placing the cast iron facing downwards, towards where the heat is coming from.

Once that’s done, just set the oven on at 400-500 degrees Fahrenheit and wait for about an hour. Once this time passes, just carefully extract the cookware. You’ll find that the heat has taken care of the issue for you, leaving nothing behind for you to worry about. 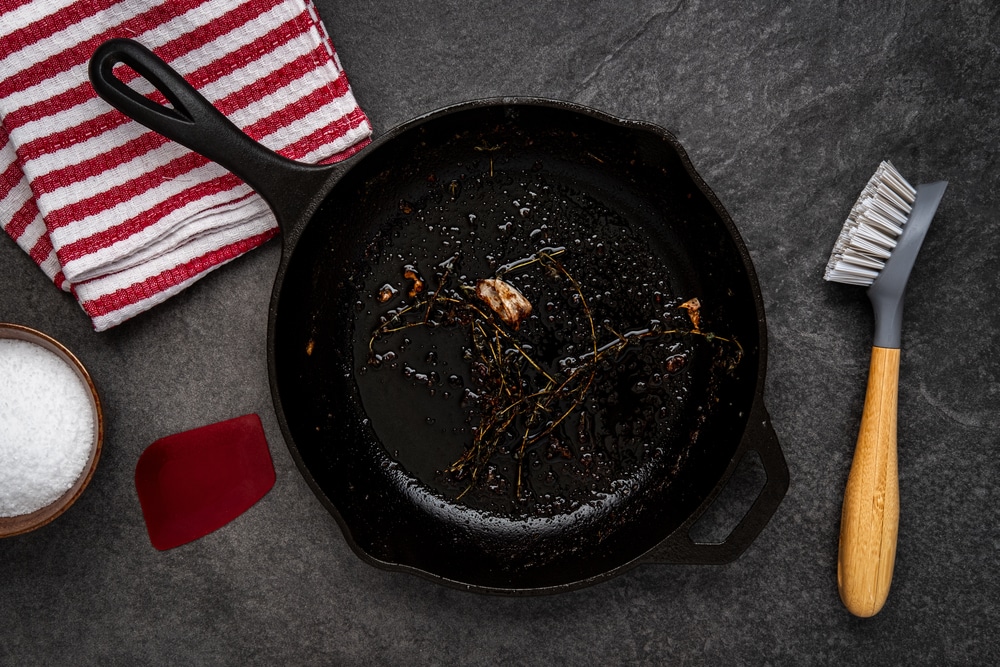