Cooking can be fun and the outcomes can be delicious if you choose the right ingredients. While the main ingredients are essential, you need to be careful about the spices and condiments as well, and oregano is one of them. It’s one of the best herbs that’s used to flavor the foods and actually has various health benefits. However, with different forms of oregano available in the market, novice chefs have a hard time choosing, which is why we have ground oregano vs dried oregano comparison in this article!

It oregano is dried in the sun before it’s grounded – the drying and grounding process also includes bundling and hanging the oregano stems in a warm area where there is sufficient airflow. Usually, the drying process can take up to seven days. However, the ground oregano is confused with dried oregano but it’s different. This is because the ground oregano has a powdered texture while dry oregano has small parts of dry oregano leaves (they are crumbled).

Ground oregano is usually used in combination with other spices and herbs but can be used on its own as well. It is mixed with spices and herbs to make a dry rub that can be used for flavoring the meat. In case you want to make your own ground oregano, you will need a herb mill as it helps ground the oregano leaves in the desired texture (fine or coarse powder). As far as storage is concerned, it’s important to use airtight containers to store ground oregano to preserve the flavor and prevent mold.

When it comes down to the flavor, ground oregano has an intense flavor and adds a peppery flavor to the food – it can also add an earthy and mildly sweet aroma to the food. In addition, the ground oregano adds pungent warmth, particularly in Greek and Italian sauces, meat recipes, and fish. The ground oregano also adds a zippy flavor to dressings for raw and cooked veggies. All in all, it adds a herby aroma and deep flavor to beans.

Oregano is a well-known herb that’s available in fresh as well as dried forms. However, dried oregano is the most common form of oregano, which is why it’s widely available in grocery stores. The dried oregano is preferred for the subtle flavor and it doesn’t overpower the flavor like fresh oregano. It wouldn’t be wrong to say that it adds a camphor note to the food and the flavor is pretty green and earthy.

In addition, it has minor hints of hay and mint (some people find it slightly bitter). The dried oregano can be added to the cooking pot during the early cooking process, particularly when you are cooking stews and sauces because its flavor can stand the heat. It is recommended that you crush the dried oregano to release deeper flavor into the food.

Also, if you opt for dried oregano, you should only use the leaves rather than adding stems to the food – if you add the stems, you will need to remove them after cooking, which can be difficult. While many people prefer the subtle flavor, it’s recommended that you add some parsley, garlic, basil, thyme, or olive oil to add intensity and depth to the flavor.

It is usually available in small bottles, particularly in the spice section. It must be stored in a dark, cool, and dry area, and make sure to use an airtight container. In case you have to use it as a substitute for fresh oregano, you need to use one teaspoon of dried oregano for two teaspoons of fresh oregano. If you have to use dried oregano as a garnish, it’s recommended that you crush them in your hands to release the flavor. However, you should always start with less oregano because it entails a bold flavor! 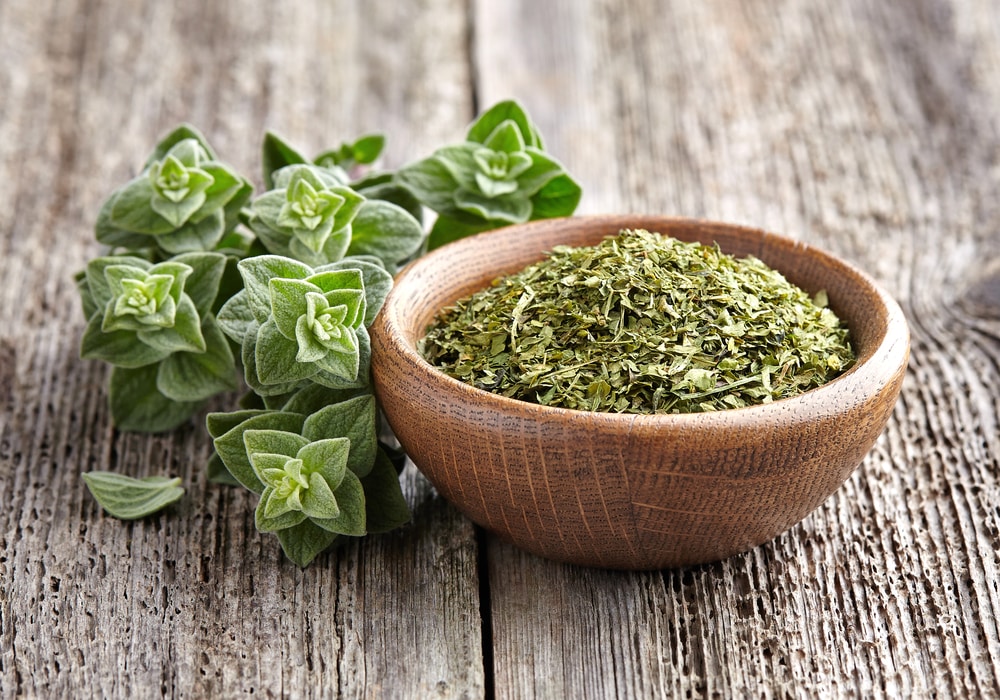