A Grill pan will help you in indoor cooking. You can grill a variety of foods like Chargrilled steaks in your comfort zone by using a grill pan. Skillet is a kind of frying pan suitable for sautéing, searing, and shallow frying of food.

Difference between Skillet and Grill pan

The main and basic difference between skillet and grill pan is due to the surface. Skillet has a flat surface, and it is best suitable for pan-frying, sauteing, and searing foods. You cannot find a flat surface in a Grill pan. If you had an experience with grill pan, you might know that grill pan has raised ridges.

Skillet and Grill pan have their distinct features. By knowing about the advantages and disadvantages of both, you can make a good decision as to which one is better for a specific type of recipe.

A grill pan resembles a lot with the frying pan. But the design of the Grill pan is a unique and distinct one, and it is much different from the skillet and frying pan. The raised edges of a grill pan assist in cooking. Grills line in a grill pan makes it a rare and desirable pan to use for cooking. The distance between the grill lines is 1 -2 centimeters. However, the grill lines are raised to 0.5 centimeters, due to this height the juice or oil in the food gets trickled down. Just like Skillet, most of the grill pans have a non-stick surface that enables easy cooking as the food does not get stick to the pan.

The main advantage of using a grill pan is that it is large that allows the quicker cooking of more food in comparatively less time.

The ridges in a grill pan are the best feature of a Grill pan. The ridges help to collect extra fat and juices from the meat. You can use this juice in sauce preparation. The people who don’t like fats in their meal will love food cooked using a grill pan. The use of a Grill pan is safe, and it helps to maintain the full original flavor of the food.

The common name for skillet is fry pan. Skillet is extensively used in the kitchen for sauteing, searing and frying purposes. The shape of the skillet is generally round. The material used for making of Skillet may vary. Normally it is made up of cast iron, but copper, aluminum, steel, or ceramic skillet are also available in the market.

A skillet is easy to clean if it uses stainless steel and a non-stick coating. You can maintain such a skillet in good quality for a long time. But you have to be more cautious while using overheated temperature as it may cause difficulty for cleaning skillet.

A skillet having a portion is not too big or too shallow in size. The manufacturers design the size of the skillet is in such a way that you can blend ingredients with ease. It is a better choice to cook ingredients in a skillet that has sections because it is easy to handle and a quick process.

One of the advantages of using a skillet is that the food can retain its original taste. Similarly, cooking the meal in a frying pan is preferred because the original flavor of the dish is not lost. If you are cooking food in a skillet using little quantity and rapidly then it will make the taste of your food better in comparison to food that is cooked using more time.

The main difference between both is the ridges in the Grill pan and the flat surface of the skillet. You can substitute Skillet and Grill pan for each other. However, both are different as skillet has a deeper structure with more diameter, so it is more viable for shallow frying and sauteing. But the main issue with the use of Grill pan is that it produces a lot of smoke. Therefore, by considering these things try to use the option that meets your requirements. 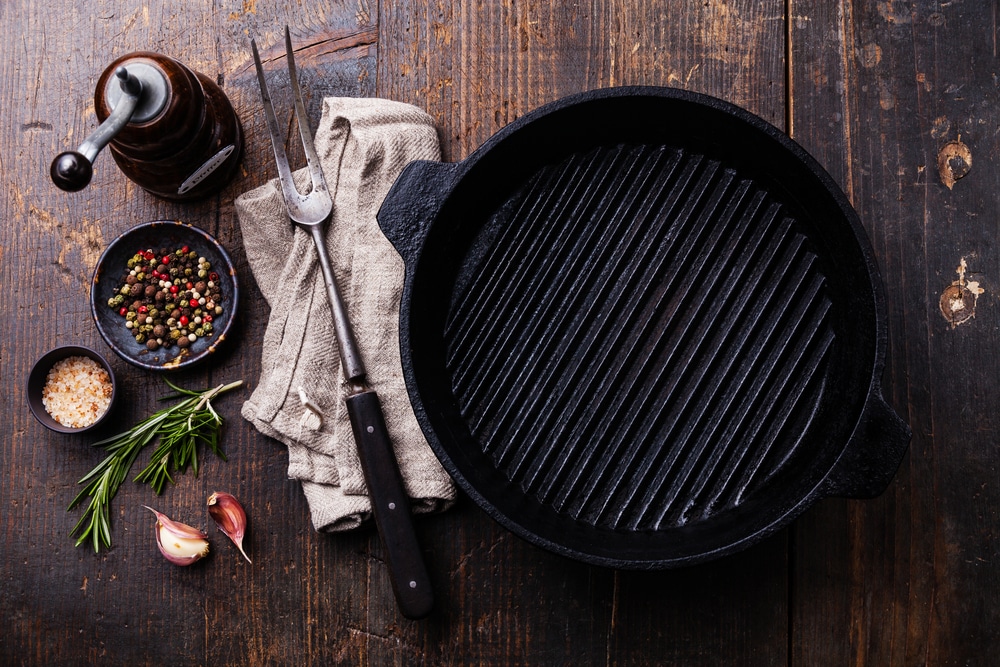