Sour milk has a rancid, rotten, sour odor, something that’s pretty distinctive and unpleasant to smell. So what about buttermilk, does it smell sour?

Buttermilk milk is inherently acidic because it’s either made from lactic acid or food-grade acids. Acid, when to something reactive, imparts a tart flavor and smell to that material. As a result, buttermilk always has a tart texture and sour taste. A sour taste gives the buttermilk a slightly-sour smell.

To explain this even further, we have to first explain how a bottle of buttermilk is made?

As mentioned above, there are three ways to make buttermilk, acidified, traditional, and cultured.

Acidified buttermilk is the least appealing product. That is why you only make it if the ingredients to make cultured or churned buttermilk is not available. To make acidified buttermilk, you’re required to mix one tablespoon of acid (lemon juice or vinegar) with one cup of whole/skim milk. Curdles that form after ten minutes of fermentation are removed, and you’re left with a glass of acidified buttermilk that’s only good for baking. As you might have read, acidified buttermilk uses acid which decreases its pH to a level lower than 4.6. The decrease in pH gives the buttermilk a slightly-acidic, slightly-tangy taste and a distinctive smell that’s slightly sour.

Unlike acidified buttermilk, cultured buttermilk is produced by introducing a lactic acid culture into a glass/bottle of homogenized milk. The bacteria culture is made from both Leuconostoc citrovorum and Lactobacillus bulgaricus, or just Lactococcus lactis. The bacteria-culture introduces bacteria that eat the sugar molecules to create lactic acid. Lactic acid decreases the pH and causes the protein molecules to precipitate, which ultimately makes curdles that are easy to remove. When curdles are removed, you’re left with a glass/bottle of acidic milk that has a tangy-taste and a slightly sour smell.

Unlike acidified or cultured buttermilk, traditional buttermilk is created by churning heavy cream with lactic acid.

Churning heavy cream with lactic acid separates it into butter and buttermilk. Since buttermilk is the liquid portion, it has the lowest pH. Low pH translates into buttermilk that has a tangy-taste and a slightly sour smell.

As mentioned above, buttermilk has an inherent tangy, slightly sour taste, and smell. So if your buttermilk smells slightly-sour, it doesn’t mean the buttermilk is ruined at all.

Ruined buttermilk has a thick, clumpy texture. It smells rancid, rotten like a damp shoe. Ruined buttermilk tastes flat, and sometimes the bottle’s lid might have mold growing on top of its surface. If your buttermilk is giving off a pungent, sour aroma then it’s probably ruined, and you should throw it away. 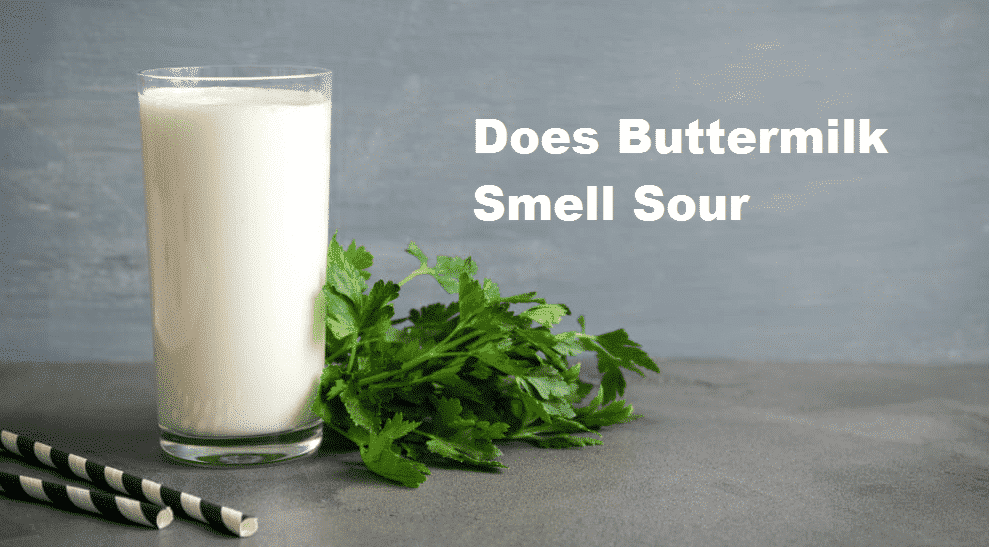