Cilantro is basically the leaves taken from the coriander plant and is widely consumed as food and many people use it as a spice as well. In many parts of the world, it’s known as Chinese parsley. It is known for its citrusy and fresh flavor but many people call it soapy, so it depends on whom you ask. However, the flavor also depends on which form you are using, ranging from cilantro paste to fresh cilantro. So, if you don’t know the differences between the two, cilantro paste vs fresh cilantro in this article will help you out!

There is store-bought cilantro paste available in the grocery stores and supermarkets and it is usually fish-free, gluten-free, peanut-free, and soy-free, depending on the brand you choose. However, it’s the most convenient way of adding cilantro flavor to the meals and is great for people who like to cook Mexican cuisine. In addition, it can be used in Indian recipes and is known for its zesty and bright flavor. The store-bought cilantro pastes are ready to be used, so you can stir them into marinades, sauces, and soups.

In addition, the cilantro paste can be rubbed onto vegetables and meats. It has to be stored in the refrigerator to make sure it doesn’t lose its flavor. The pastes are made with organic cilantro, organic canola oil, and xanthan gum can be added to extend the shelf life. It can be stirred into the food or you can rub it on the food. When it comes down to cooking, you can opt for a 1:1 substitution ratio. For instance, you can use one tablespoon of cilantro paste to replace one tablespoon of fresh cilantro.

While it’s a great addition to marinades and cooking, it can be used as a salad dressing and you can use it as a dip for dipping in the French fries and pizza. Moreover, you can rub it on the burgers to add extra flavor. The cilantro paste has to be sealed in an airtight jar and stored in a refrigerator. If you have made the paste at home, it will remain fresh for a week. However, the homemade cilantro paste’s flavor mellows down but you can add some lime juice to prevent the oxidization of the flavor.

To make the cilantro paste at home, you need to chop it finely to make sure it blends into an even and smooth paste. As far as serving is concerned, it can be served with burgers and chicken roast. In addition, it can be served with tacos, spinach and shrimp quesadillas, bean quesadillas, and nachos. On top of everything, it is recommended that you add some fresh jalapeno seeds or red pepper flakes to the paste to add a spicy touch to the paste.

Fresh cilantro is one of the most versatile herbs out there and is a great addition to Asian, Middle Eastern, Mexican, and Indian cuisines. Since it doesn’t dry well, the fresh cilantro is mostly used and has a unique flavor. In the majority of cases, the finely chopped fresh cilantro is scattered on top of your dishes and is also used in salsa, chermoula, and zhug.

It is cut from the coriander leaves and it is known to have flat leaves. Fresh cilantro has tender and long stems and you can use the cilantro seeds to make your own spice. In addition, the cilantro roots are edible and can be added to the dishes. Fresh cilantro tends to have a lemony, bright, pungent, and peppery flavor but some people also think that there is a soapy flavor.

The soapy flavor is usually caused by the aldehyde chemical in cilantro leaves. The flavor of the cilantro diminishes upon cooking, which is why it’s used in fresh form. The fresh cilantro can be purchased from the supermarkets that have fresh produce but you need to wash it properly to remove the grit and dirt. In addition, you need to pluck the leaves and chop them.

These leaves should be added as a top dressing or at the end of the cooking process. In addition, the fresh cilantro stems can be blended to make pesto. Last but not least, when you have to purchase fresh cilantro, look for cilantro with bright green color. 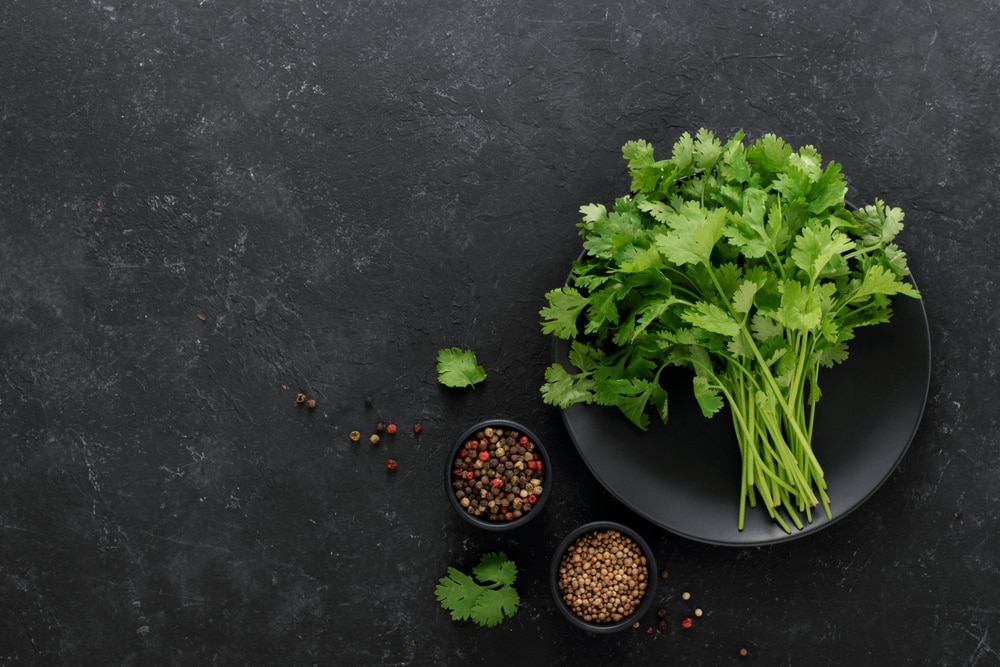