It’s evident that cheese is an important part of every panty, but cheese curd is another whole story. Be it eggs or salads, cheese curd can be used in a variety of dishes, but what is it? With this article, we are sharing everything you need to know about it, along with the cheese curd substitutes!

During this process, the milk clots are formed, which can be cut into cubes. These cubes are cooked and pressed to release the whey, hence the cheese curd. The cheese curd has a mild flavor, but the taste relies on the making process. Generally, it has a similar density and firmness to the cheese, but it has a rubber-like texture. It’s best to store cheese curd at room temperature.

The cheese curd is often consumed as an appetizer, snack, and finger food. It can be served with sausages and pork, but it can be dressed for additional flavor. All in all, cheese curd can be flavored with garlic, jalapeno, spice blends, and herbs. That being said, if you need the substitutes for cheese curd, we are sharing them below!

The cottage cheese has a low-calorie count, which makes it suitable for health-conscious people. It can be consumed with fruits, yogurt, granola, toast, salads, and as a dip. In addition to being the replacement of cheese curd, it works as a great replacement for mayonnaise as well. It has slightly sour hints that are because of lactic acid.

Cottage cheese is an important ingredient for a variety of dishes. It can be mixed with sugar and fruit, granola, tomatoes, and fruit puree. In addition, it makes a great chip dip and can be spread on the toast. Above all, it can be added to multiple dessert recipes and jello salads.

Fried cheese is a fine substitute for cheese curd if you want snacks or appetizers. It is made by frying cheese in oil. It can be deep-fried as well as pan-fried. It goes perfectly as snacks or appetizers. Fried cheese is extremely famous in the Dominican Republic and Brazil. In many parts of the world, it’s also served with breakfast dishes. Generally, it is served hot and tastes the best with dipping sauce or dressing.

This is the unripened and semihard cheese, which is made from a mixture of sheep and goat milk. Some varieties are also made with cow milk. Halloumi has a high melting point which means it can be grilled and fried. For the production of halloumi, rennet is used for curdling the milk. However, the preparation and production don’t add acid-producing bacteria.

This is commonly known as bread cheese and has become a fine replacement for cheese curd. Even more, some people know it as Finnish squeaky cheese. This cheese is made from beestings of the cow, which is extremely rich milk. In addition, this cheese can be made from goat milk or reindeer milk. However, there is no flavor or color in the cheese.

This cheese usually has a hard texture but can be softened on heat. Once melted, it makes an appetizing flavor and aroma. It has a mild flavor and can be dried in the ventilated areas. Even more, it can be served in small pieces with coffee. As for consumption, it can be eaten in a cold or warm form.

All these substitutes from this article are great for substituting cheese curd. However, if you are still looking for some substitutes, you can mix parmesan cheese and mozzarella and it will deliver the perfectly salty flavor. 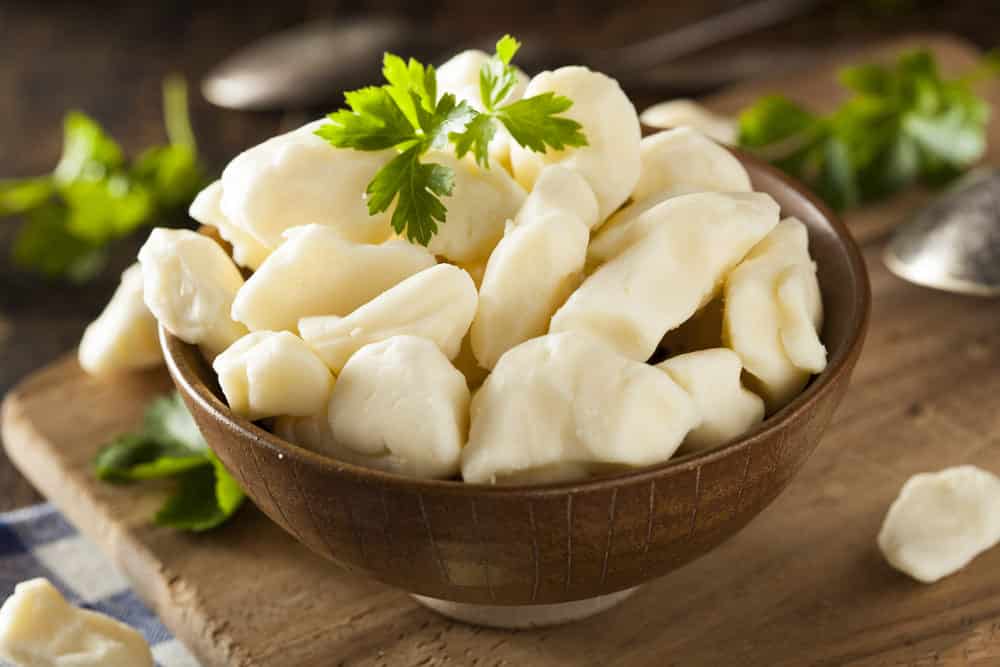