Snacking is incomplete without bacon, and we are sure that bacon is an important part of your breakfast plate. Bacon is also added to club sandwiches, but what about bacon lardons? Bacon lardons are extremely rare and expensive. So, if you want a replacement, we are sharing the bacon lardons substitute for you!

Bacon lardons are small cubes and strips of pork fat or fatty bacon. It is usually used in salads and savory recipes for adding flavor to the recipes. The bacon lardon is used for larding purposes in French recipes. It can be added to roasted and braised meats. The lardons can be added to salad dressing or salads. In addition, it goes perfectly with quiche, stew, and omelets. The bacon lardon can be prepared from pork cuts, such as fatback and pork belly.

Before we move on to the details, let us tell you that it’s the healthiest option out there. Turkey bacon is the processed meat (white meat is used). It has low fat and calorie count. There are multiple options of turkey bacon out there, and you can choose whichever you can find. Turkey bacon can be served with leafy greens and other veggies.

If you want the vegetable-based option that can replace bacon lardon, you can opt for eggplant bacon. Eggplant bacon has a rich source of potassium, antioxidants, vitamin C, and fiber. It’s a great option for people who have heart issues. However, eggplant bacon is not available in grocery stores, so you will have to make it on your own.

Whenever you imagine the morning grub, we understand that you don’t think about the duck. However, duck bacon is a great replacement for bacon lardons. This is non-red meat, but the fat content will be less. Duck bacon is basically the processed meat, so it’s best to use it in the lesser amount. Also, it will not be very crispy, so you’ve to add some other crunchy ingredients.

Tofu bacon is a suitable substitute for bacon lardon since it’s rich in protein. It has become an apt source of iron and calcium. Tofu bacon has thin slices, but it doesn’t get crunchy. Tofu bacon can be marinated in tomato sauce, Worcestershire sauce, or maple syrup.

This is widely used in Italy with soups and pasta. Pancetta is basically the salume which is made from meat. In particular, it’s made from salt-cured meat. It can be cut into cubes for cooking purposes. Some people slice it in thin form and can be consumed in raw form. Pancetta is available in two types, such as rolled pancetta and flat pancetta. All in all, you can use whichever type of pancetta you want since they are made with similar seasonings, such as garlic, salt, spices, and sugar! 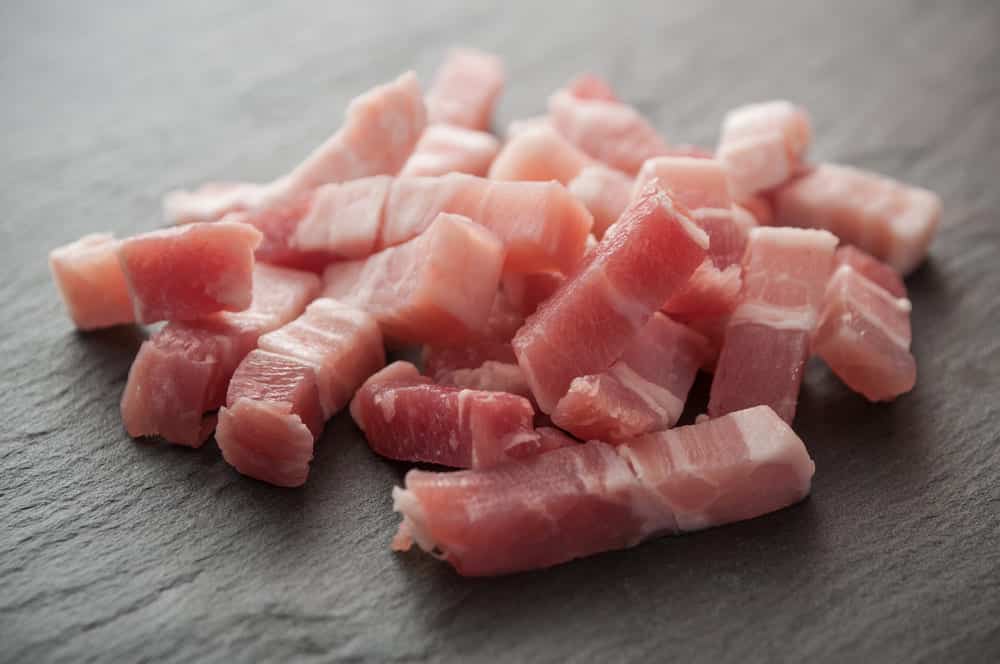